The Blue Naan is located in the heart of Felixstowe town centre, just off the coast. It has a great reputation locally and on sites such as TripAdvisor, so I decided to pay it a visit.

Despite being Saturday night it was very quiet when we arrived which worried me slightly, to be fair it was quite early but i’d still have expected good Indian restaurants to have more than a couple of diners. There were a lot of staff so i’m sure they were expecting it to be busy later on.

We were brought popadoms which were freshly made, light, crisp and still warm. Along with various pickles and chutneys which were all good except lime pickle which is evil and tastes of the devil.

There was an interesting selection of starters which made a welcome change from the usual mixed grills and onion bhajees, although they did also offer both of those too.

We went for ‘Paneer Fusion’. Large cubes of the loverly soft Indian cheese in a hot and spicy soy sauce with incredibly hot green chillies. I’m fond of hot food but these chillies were far too hot even for me, I tried one and went bright red and rather sweaty. I reluctantly left the rest but everything else was devoured and enjoyed. A clever dish. 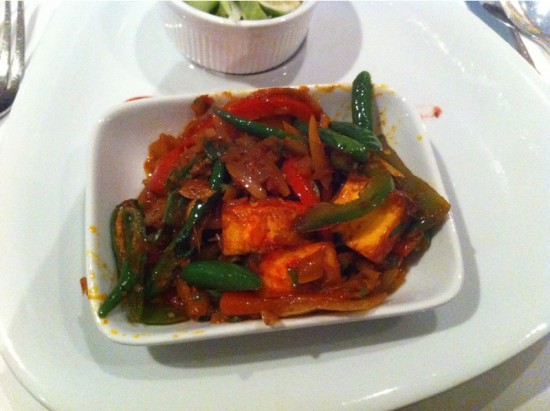 Our second starter ‘Chickpea & Mushroom Pancake’ was less explosive but tasty all the same. A spicy mixture of chickpeas and mushrooms stuffed inside a chapatti or roti type of bread and fried. The sweet & spicy chilli sauce on the plate was delicious but we could have done with a lot more of it. 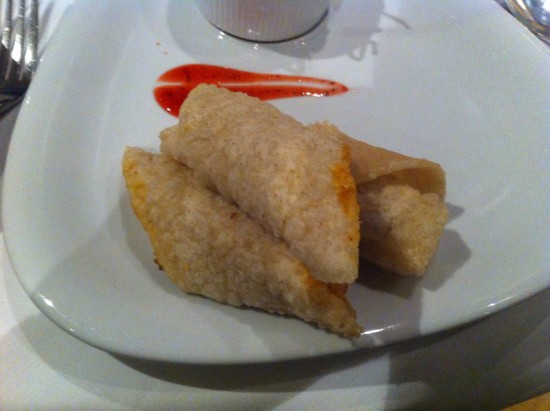 For main courses we went with the “House Speciality” ‘ Zaidas Murug Mirch Massala’ – tandoori chicken, cooked with green chillies, coriander, tomato and capsicum and the classic ‘Buttered Chicken’. Both were really good, particularly the Massala which was packed with flavour.

Chapattis and naans were also freshly cooked and good quality.

We didn’t have time for desserts and were getting pretty full by that point anyway but had enjoyed everything we’d eaten. Service was good although it would be very difficult not to be as there were literally more staff than customers. Overall it was an enjoyable evening and I can see why the Blue Naan has such a good reputation. If I was local I imagine I would be a regular.

Follow @FoodGeekUK
The Blue Naan is located in the heart of Felixstowe town centre, just off the coast. It has a great reputation locally and on sites such as TripAdvisor, so I decided to pay it a visit. Despite being Saturday night it was very quiet when we arrived which worried me slightly, to be fair it ...