I’m a big fan of a decent burger, even more so after Burger & Lobster a couple of months ago. So when looking for somewhere decent to eat at The Trafford Centre last night (a challenge in itself) I thought i’d give Gourmet Burger a try. It must be good if it’s called Gourmet Burger right?

Well, the menu looks fairly impressive so I was genuinely looking forward to getting inside and eating. It started off well with unlimited, serve your self monkey nuts which is a nice touch. The positivity continued when the our starters arrived. First some of the best olives i’ve had in a restaurant in this country, genuinely very tasty and really good quality. The ‘Haloumi Bites’ were also very good and were served with a fantastic spicy kiwi fruit & jalapeno sauce. The only slight disappointment were the onion rings which were a little bland and slightly overcooked. 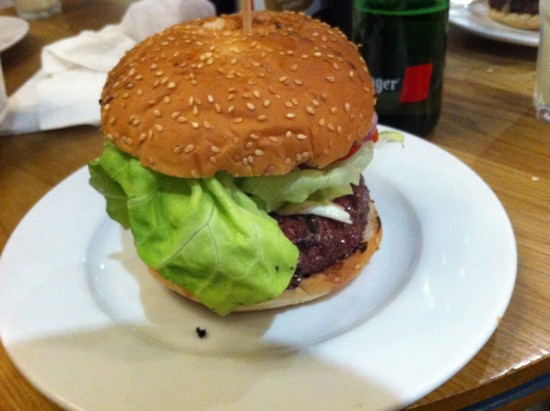 The burgers arrived shortly afterwards, no complaints about the speed either. I’d ordered the ‘Habanero’; the first thing I noticed was how poor quality the bun was. I really hate bad bread, particularly when it comes to burgers. Standards have improved a lot in this area over the last few years with brioche buns being commonly used, apparently Gourmet Burger didn’t get the memo and are sticking with the cheap and nasty burger van style. The spicy tomato & habanero jam was OK and the mozzarella perfectly melted but the salad leaves were uninspiring and just thrown on with little care. The worst thing was the beef patty itself. I had ordered it medium-rare but it was much closer to rare, really very pink. Usually that would be a good thing in a burger but i’m really not sure this beef was good enough quality to eat almost raw. It certainly didn’t feel like it. Worse still, it was so undercooked that it just started to fall apart when eating, there was no crust or charring on the outside just a soft, soggy pile of undercooked minced beef which also had very little seasoning. If it hadn’t been for the habenero jam it would have been completely bland. It looked and tasted like it had been made by somebody who simply didn’t care.

My partner ordered the ‘Greek Lamb’ burger. It was served on the same bread but was even worse than mine, it was literally drowned in cucumber raita turning the bread very soggy. She found the meat better than mine, perhaps because she’d ordered it medium? It wasn’t seasoned either but the lamb was definitely tastier than the beef. The menu claimed that it also contained chilli salsa & houmus but we couldn’t taste either of them. 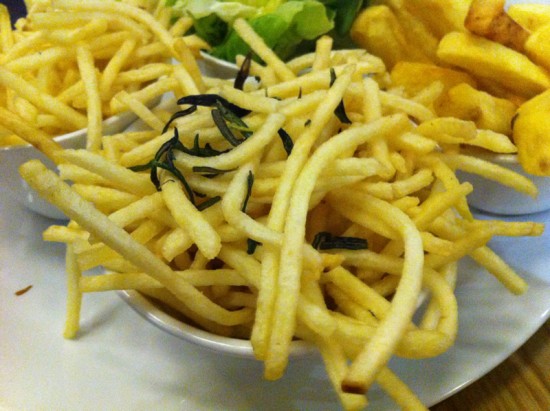 We ordered chunky double cooked fries and skinny rosemary fries. The chunky fries were greasy, soft and a little cold. The rosemary fries were just about OK but cost £1.60 more than the regular skinny fries. Presumably the only difference being the few strands of burnt rosemary which somehow added zero flavour.

We decided to pass on desserts as they seemed a little uninspiring even on the menu and we’d had enough already. There is nothing even slightly ‘gourmet’ about Gourmet Burger. It’s not absolutely terrible but with a name like that and the prices they’re charging it needs to be a lot better. Our bill came to £45 for a few starters, 2 burgers, 2 fries and 2 beers which is ridiculous for food of no better standard than your average cheap & cheerful burger bar. In fact they’re not even as good quality as places like McDonalds & Burger King despite costing so much more, at least those places know what they are and do what they do well, they’re not trying to be something that they’re clearly not. I would much rather have paid £15 at McDonalds and gone to a pub for a few drinks afterwards and walked home £20 richer.

Follow @FoodGeekUK
I’m a big fan of a decent burger, even more so after Burger & Lobster a couple of months ago. So when looking for somewhere decent to eat at The Trafford Centre last night (a challenge in itself) I thought i’d give Gourmet Burger a try. It must be good if it’s called Gourmet Burger ...