As much as I love the interesting and modern cuisine that our top restaurants are serving these days there will always be a place in my heart for classic, French fine-dining. It’s where it all began for me at Gordon Ramsay’s flagship 3 Michelin star Royal Hospital Road restaurant in 2006.

So I was fairly excited to hear about 63 Degrees opening in Manchester promising “A taste of Paris brought to you by the Moreau family”. The Moreau family are Alexandre who moved to Manchester and then convinced his Dad and now head chef Eric and mother Florence to move from Paris to open the restaurant.

It’s located on Church street in the Northern Quarter, the place to be for cool restaurants it seems.

We arrived on a soggy, cold and wet Tuesday night and were welcomed by Florence. The place is small and intimate and very impressively designed with a classy and modern decor. It actually reminded me of the aforementioned Restaurant Gordon Ramsay.

We ordered a nice bottle of French wine and selected the 5 course tasting menu.

The first course arrived quite quickly, Tomato and Basil gaspacho. It looked nice and tasted good, silky smooth and bursting with rice tomato and basil flavours and topped with an edible flower. I’m sure I would have enjoyed it much more on a hot summers day and would have preferred a warm soup but I suppose I can’t hold them responsible for the weather! 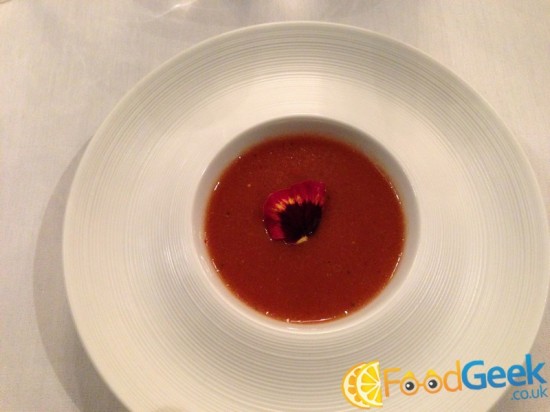 The next course took almost 30 minutes to arrive and by that time we were absolutely starving. The long wait was made worse by the fact that we weren’t offered any bread which I thought was odd. Most restaurants of this standard would offer complimentary bread but personally I would have been more than happy to pay for it if it was a cost issue.

When it did finally arrive it looked pretty but very small, it was French classic ‘Escargots en persillade’ – Snails in parsley butter, served with potatoes and a few young leaves. The snails were delicious, juicy and buttery with loads of garlic but there was only 3 of them and the whole dish was gone in seconds. We were still starving. 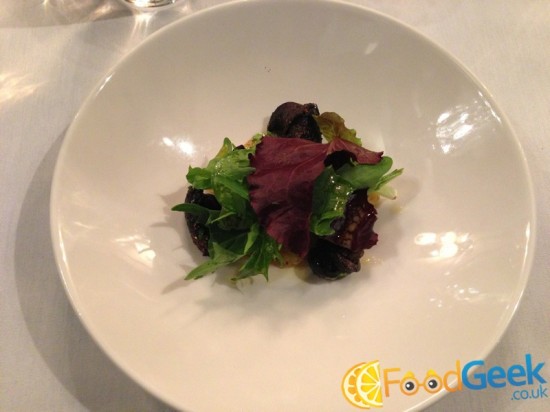 The fish course of ‘Pan-fried sea bream, orzo risotto with vegetables’ was slow to arrive as well but much better in terms of size. A decent sized piece of fish with a substantial mound of orzo risotto. An orzo risotto isn’t really a risotto as orzo is actually a tiny pasta shaped like rice grains.

The fish was fantastic, amazingly crispy skin with beautifully soft and moist flesh. The ‘risotto’ was nice but I think I prefer a traditional rice risotto, the courgette running through it added an interesting dimension. The star of the dish was by far the sauce though, a veal reduction that was out of this world. So deep and meaty it worked perfectly with the fish but there was nowhere near enough of it. There was only enough to go with 2 or 3 mouthfuls of the fish and risotto, meaning the second half of the dish were not even nearly as good as the first. Such a shame. 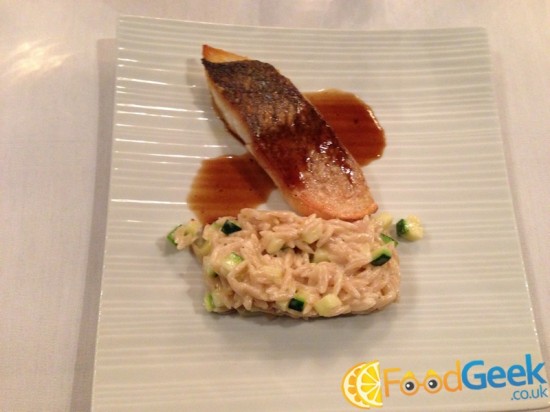 Hunger levels were starting to rise again as we had another 15+ minute wait between courses. Our main meat course was the restaurants signature dish ’63° chicken breast’.

Again I had a problem with the portion size, the chicken was really small, the menu said ‘roasted cherry tomatoes’, plural but we received only one.

It did deliver on taste though, the chicken was cooked well, the dauphinois were tasty but slightly drier than I expected. I’m not sure if they were supposed to be creamy or not but I thought they should be and they weren’t. As with the fish dish the star was the sauce, a really rich and creamy morel mushroom sauce that was a brilliant accompaniment for the chicken and the slightly dry potatoes. Unfortunately just like the fish dish there wasn’t enough of this one either. The single whole morel mushroom with the sauce was delicious too and a few more would have been appreciated too. 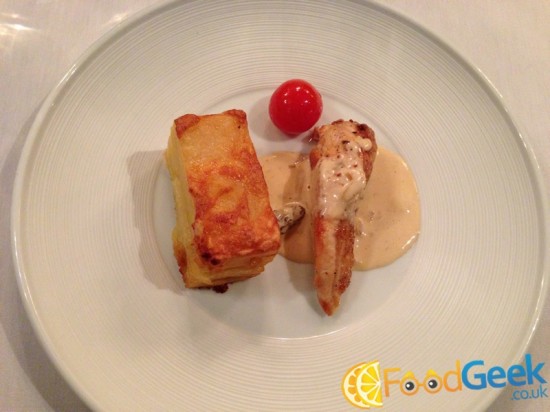 By the time the final course arrived we had been in the restaurant for almost 2 hours which is far too long for 5 small courses on a quiet Tuesday evening. There was really no reason we should have waited so long for the dessert as it was so simple. ‘Lemon Cream’ was literally just that, a Martini glass filled with lemony flavoured cream and topped with 3 raspberries. Not the most exciting dessert but it was nice enough, very refreshing, smooth, thick good quality cream with a great balance of sweetness and lemon sharpness. Like most of the dishes it felt like it was meant for a summers day. 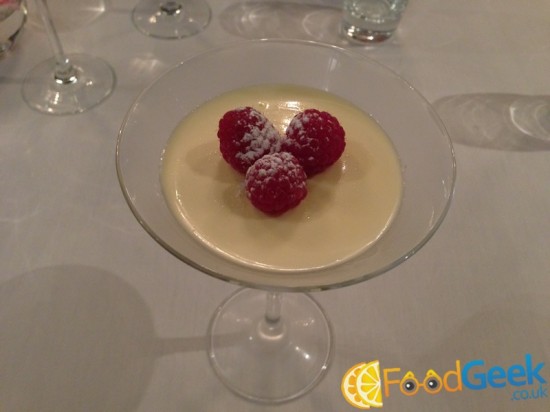 Although it may not sounds like it I did mostly enjoy my time at 63 Degrees, the food is generally high standard as I expected knowing that the head chef Eric has previously worked for two-starred Michelin chefs in Paris. Service was only let down by the huge wait between courses, Florence was charming and another waiter very friendly too. My biggest problem was the portion sizes and lack of bread, the tasting menu is quite low in price but that doesn’t necessarily mean it’s good value because I just don’t think it’s enough food. I’d much rather have paid more for bigger portions. Dishes of that size belong on a 9+ course tasting menu, not a 5 course.

I may decide to revisit to try the regular menu as I’m sure 63 Degrees has the potential to be a really good restaurant.

Follow @FoodGeekUK
As much as I love the interesting and modern cuisine that our top restaurants are serving these days there will always be a place in my heart for classic, French fine-dining. It’s where it all began for me at Gordon Ramsay’s flagship 3 Michelin star Royal Hospital Road restaurant in 2006. So I was fairly ...