Solita is one of the coolest new places in the ever growing Northern Quarter of Manchester. It’s slightly out of the way on Turner street where ‘Sole‘ used to be.

Perhaps slightly confusingly, Solita isn’t an Italian restaurant. The name means ‘South Of Little Italy’ in reference to the location of the restaurant near the Ancoats Little Italy area of Manchester.

I’ve been trying to get to the restaurant since before it even opened after following the build up to the launch on Twitter, for various reasons I didn’t manage it for months. Although I did make it to their NQ street party ‘Solita In The Street’ in August to sample some of their now infamous dishes such as ‘Deep Fried Mac ‘N’ Cheese Balls’, ‘Pulled Pork Sundae’ and ‘Deep Fried Coke’. Despite being mass produced for a street party everything I tasted there was amazing and so I couldn’t wait to get back to the restaurant properly.

After being seated we started with the restaurants signature cocktail an ‘Aperol Spritz’. Aperol is a trendy new Italian spirit similar to Campari, it’s made with orange bitters and rhubarb and is delicious. It’s mixed with Prosecco, fresh orange and crushed ice to make the Aperol Spritz, a light and refreshing cocktail which is far better suited to summer but was enjoyable all the same.

I’m never very good at picking from menus as I often want to eat everything, that was definitely the case with the starters. The fact that I had eaten the pulled pork sundae and mac ‘n’ cheese balls actually made it even more difficult as I wanted them again. In the end there was no way we could pick just one each and ended up with four between us.

Firstly ‘Rooster Fries’. These deep fried chicken skins are similar to pork scratchings but much tastier, I was surprised at how light they tasted although I dread to think how many calories they contain, but they’re so good they’re worth it. 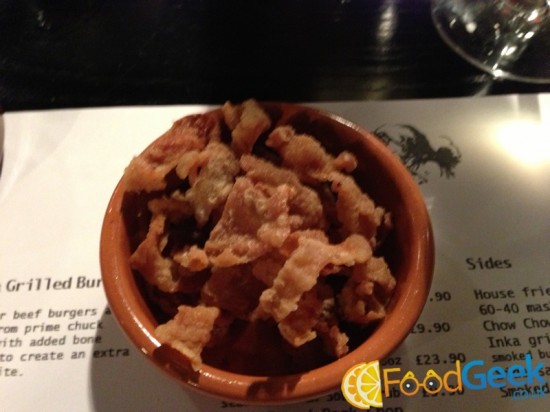 Next up was ‘Salt Cod Balls’ with salsa verde mayo. These delicate balls of fish were gorgeous too. Soft and fluffy inside with a crisp exterior. The sharp salsa verde mayo is a great contrast. 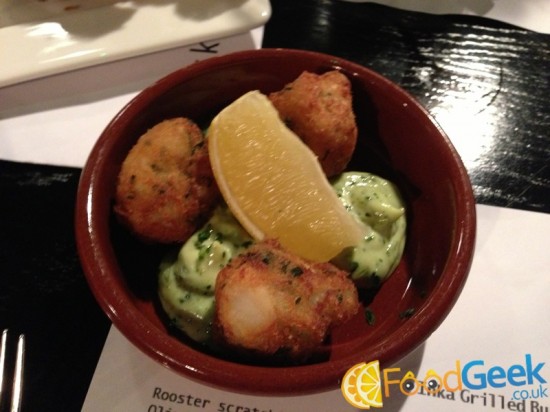 The ‘Pulled Pork Sundae’ tasted fantastic even out of a plastic cup at ‘Solita In The Street’. This time it looked much prettier served in a nice glass and it tasted even better too! I’m a huge pulled pork fan anyway and the pulled pork at the bottom of this sundae is as good as it gets. Soft and melt in your mouth meat with a delicious BBQ sauce. It’s topped with swirls of 60/40 mash, the 60/40 refers to the ratio of potato to butter. Yes, the mash is 40% butter! No wonder it tastes so good, not one for the dieters!

Finally it is topped with crispy pork crackling. I was slightly disappointed as there was no pickle spears which I have seen on photographs of the dish previously. I don’t know if they’ve changed the recipe of were just out of pickles. It didn’t stop me enjoying what is not only a fun and interesting dish with quirky presentation but also one of the best tasting dishes i’ve had for a while too. 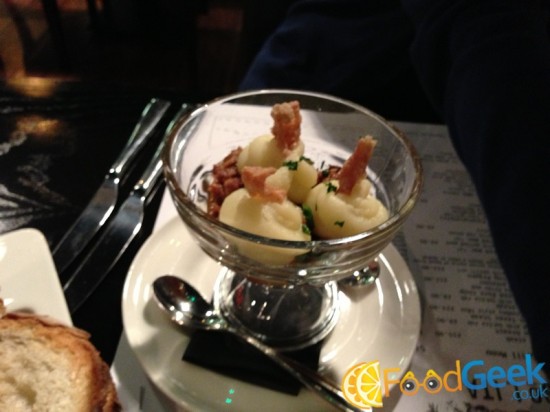 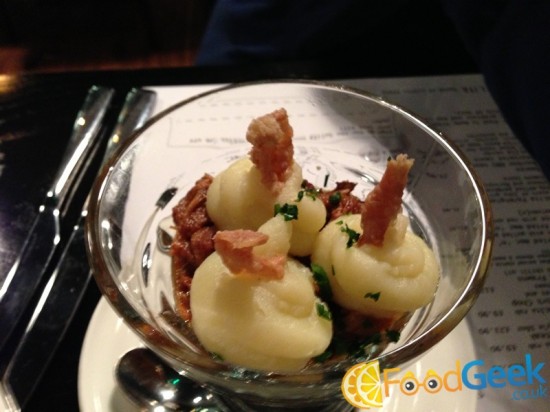 The only starter that disappointed slightly was the ‘Sourdough Toast with Bacon Jam’. It wasn’t bad at all, in fact the toast was excellent. My only problem was that the bacon jam doesn’t particularly taste of bacon, it had a smokey flavour but not distinctively bacon. I think I would have struggled to identify it had I not known. Not bad but if you promise me Bacon Jam it would be better if it had a big bacon flavour.

With some difficulty we did manage to restrain ourselves and only order 2 main courses. I picked the ‘Hanger Steak’ which is one of the most underrated cuts of steak, at least by consumers, it’s apparently known as “butcher’s steak” because butchers often kept it for themselves instead of selling it.

It’s the cut of steak with the deepest beef flavour by far, it’s only problem is that it can be quite tough if it isn’t cooked properly. The best way to do this is to cook it fast and serve rare or medium rare. That’s where Solita’s method of cooking on an Inka grill comes in handy! An Inka grill is a very special thing, I saw it in action at the street party and was very impressed. It uses real charcoal which not only gets incredibly hot which is great for charring the outside of food but also adds incredible smoked flavour. It’s absolutely perfect for the hanger steak. It was blackened and charred on the outside but amazingly juicy and pink inside. The meat itself was deep and rich flavoured and the charcoal crust was fantastic. It’s very different from a sirloin or rib eye but equally as enjoyable, much more so in many ways. 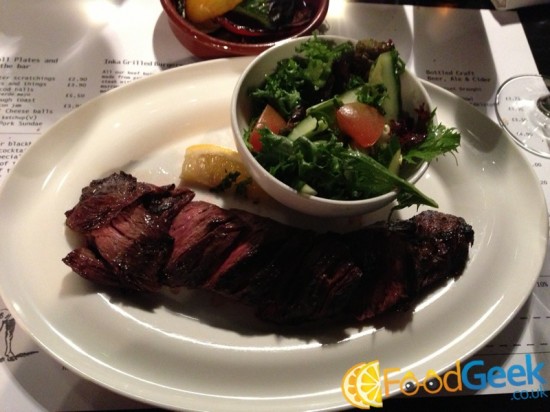 Solita have a fantastic selection of burgers on offer. With interesting ingredients such as fried chicken and smoked brisket chilli. We enjoyed their relatively simple Classic burger at the street party, which again has a lot to do with the way they’re cooked on the Inka grill. My partner ordered the ‘Catalan’ burger which contained Chorizo, melted Manchego cheese, roast peppers and roast tomato allioli.

It looked great and was huge, she was worried that she wouldn’t be able to get her mouth around it but once she got going it wasn’t a problem.

We both felt that the burger was slightly overcooked, there was only a little pink to be seen, although to be fair it was still very moist probably due to the patties having added bone marrow. It tasted really good, the chorizo was incredible, we couldn’t taste (or see when we tried to find it) the roast tomato allioli which was a shame as I’m sure it would have made an already great burger taste even better! The burger was served with a sweetcorn relish which was very sweet and fries which were OK but nothing special. 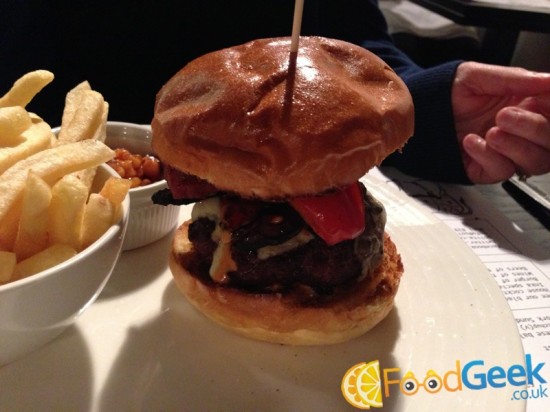 We also ordered a side dish of ‘Inka grilled vegetables with smoked butter’. Well that’s what the menu said anyway but like the tomato allioli there was no smoked butter to be seen or tasted. Again this was a shame as the vegetables – nicely charred red, green & yellow pepper and courgette – were good but the butter would have transformed the dish into something else. I mentioned it to the waiter and to his credit he was very apologetic and insisted on removing them from our bill (which wasn’t my intention at all).

Just as our desserts arrived a ridiculously loud fire alarm was set off by a huge cloud of smoke from the kitchen. Somebody having a bit too much fun with the Inka grill perhaps? As if putting up with the noise in the restaurant wasn’t bad enough, after a few minutes we were kicked out to the cold Manchester street for ‘health & safety reasons’. I know things like this can’t be helped and i’m sure it’s not a regular occurrence, i’m just glad that it wasn’t raining for once!

When we were finally allowed back in after what felt like hours but was probably no more than 5 minutes it was time for dessert. I had ‘Inka Roasted Pineapple’. The pineapple had been marinated in Havana 7 rum and molasses & served with coconut ice cream. The pineapple was sweet and juicy with a great flavour and loverly bar marks from the Inka grill. The coconut ice cream worked really well with it. 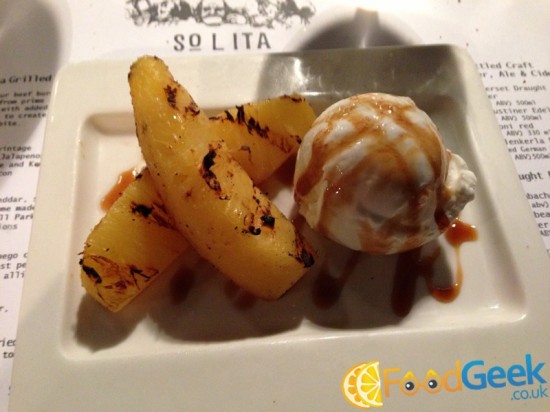 My partner ordered perhaps the most intriguing dish on the menu ‘Cabrelli’s vanilla ice cream with bacon candy’. Cabrelli’s ice cream is pretty famous in and around Manchester and for good reason, it is amazing. I’ve no idea how to describe the bacon candy, it sounds so wrong, it looked wrong but it was just so damn good! Gorgeous bacon flavour, really sweet and chewy due to the caramel it was encased in. I’ve no idea what they were thinking when they came up with it but it just works. You really do need to try it to understand. 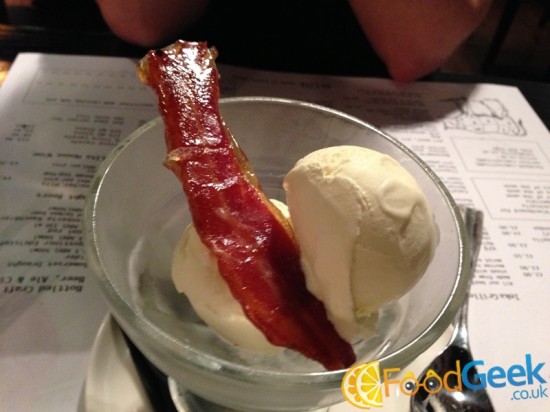 As well as having an excellent cocktail list Solita also have a good wine list. The house wine is amazing value at £16 for a litre, we had a litre of the white and it was really good, it would have been very impressive at twice the price.

I had a really great time at Solita. There were a couple of minor problems with the food such as the lack of sauce on the burger and butter from the grilled vegetables but overall it was a very high standard. Service was slower than I expected considering it wasn’t particularly busy but the staff are all very friendly and attentive and look like they are enjoying their jobs. The waiter mentioned that there was a new chef in the kitchen which may explain both the problems with the food and the speed it was coming out.

It wasn’t enough to ruin our night though, the food is easily some of the best in Manchester. It’s good quality, the dishes interesting, the staff great and it’s really good value too. We both love the place and will definitely be back regularly. We’ve already booked for their special Thanksgiving Dinner which contains intriguing dishes such as Sweetcorn chowder and ‘Buttermilk fried turkey’ and will be back to try the last few bits of the regular menu that we’re yet to taste. I have no doubt that it will be even better next time and that Solita is definitely one of the best restaurants in Manchester.

Follow @FoodGeekUK
Solita is one of the coolest new places in the ever growing Northern Quarter of Manchester. It’s slightly out of the way on Turner street where ‘Sole‘ used to be. Perhaps slightly confusingly, Solita isn’t an Italian restaurant. The name means ‘South Of Little Italy’ in reference to the location of the restaurant near the Ancoats Little ...