What’s the difference between a turkey and a food blogger after a Christmas party? Nothing, they’re both STUFFED!

Already a firm favourite with most of the bloggers in attendance – including myself – Mughli really outdid themselves with a specially created ‘Slumdog Supperclub’ menu. Organised by Bailey of GoodGobble Blog and Mughli boss Haz with most of the recipes coming straight from ‘Mamma Mughli’. 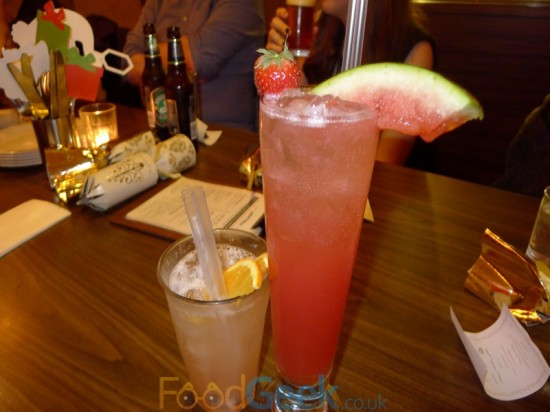 After putting faces to the Twitter avatars of the few remaining bloggers I hadn’t yet met we got straight down to what we do best, eating (and drinking)! 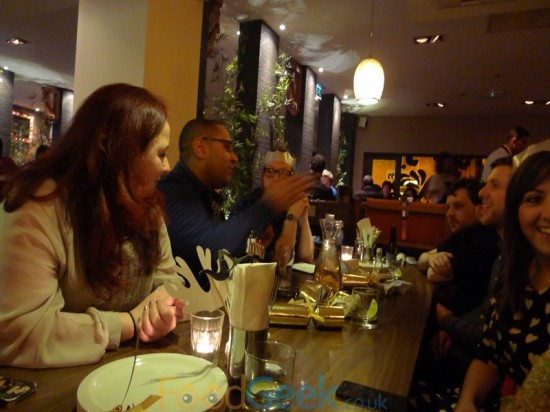 Starting with a festive aperitif, ‘Nashpati Bellini’. A sparkling prosecco cocktail with sweet pears poached in a christmassy mulled wine. 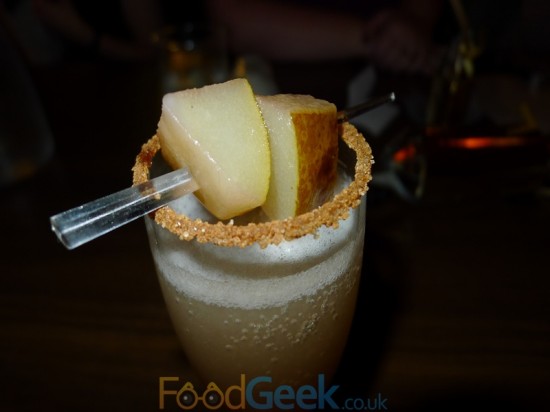 Appetisers in the form of ‘Far Far’, a deep fried potatoey snack not dissimilar to pork scratchings and ‘Bombay Bhel’, a popular street food dish sold from roadside carts in Mumbai. I loved the Bombay Bhel the most, it had a surprising amount of heat and a variety of flavours and textures. Every mouthful brought a combination of crunchy, crispy, spicy and sweet. The addition of pomegranate was particularly good.  We all had to keep reminding ourselves this was only an appetiser, there was more to come, lots more. 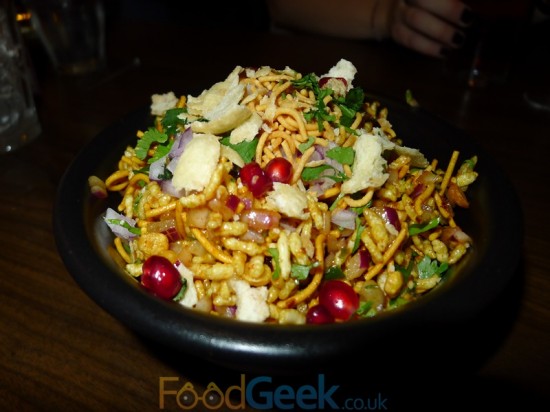 Why have one starter when you can have three? Well it is Christmas!

The first of our trio was my favourite, ‘Barbur Burgur’ a spiced chicken burger with tamarind and a pineapple & mint chutney served in a squidgy soft white bun with a portion of sweet potato fries. The chicken burger was just fantastic, packed full of tantalising flavours, i’d love to see a full size version of this on the regular menu. 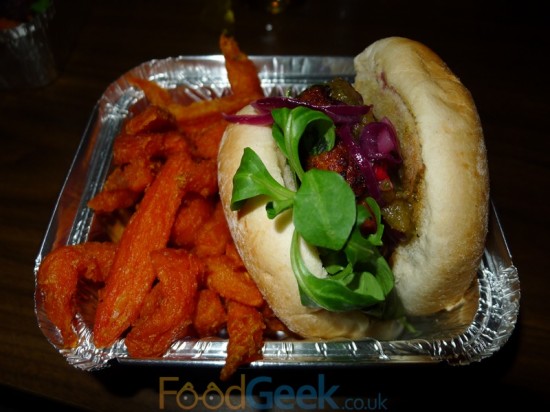 I’m a big fan of calamari in general so was genuinely excited to try this version with an Indian twist, ‘Keralan Calamari’. It was pretty good but not flavoured quite as much as i’d expected actually, especially compared to the other dishes. The turmeric mayo however was a revelation, i’ll definitely be borrowing that one. 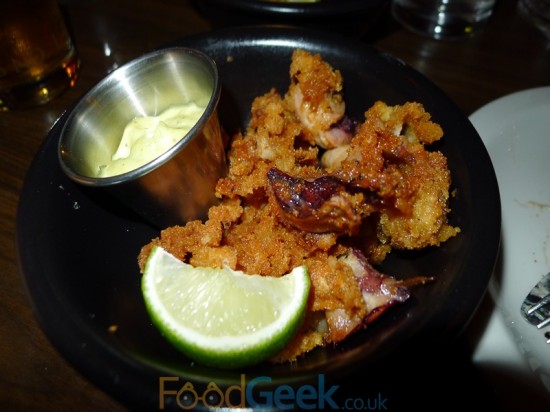 The final starter, ‘Aloo Cutlets’ was the only starter suitable for the vegetarians but was good enough to keep them happy. Fried potato cutlets, crispy on the outside yet wonderfully soft inside with a great depth of flavour and spicing. 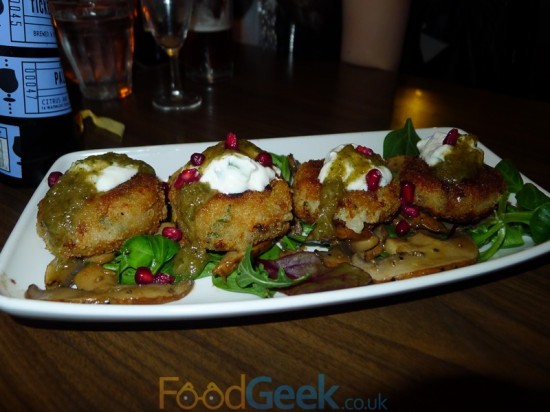 We may have already eaten enough to be considered a meal by many people but knowing how much we like to eat Haz had provided not one but six main courses! Each brought to the table in amazing giant ceramic pots belonging to Mamma Mughli herself. 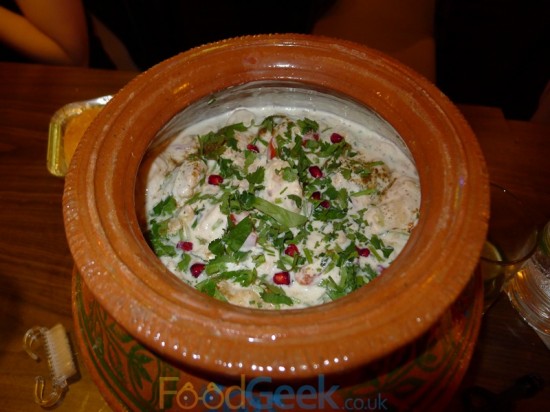 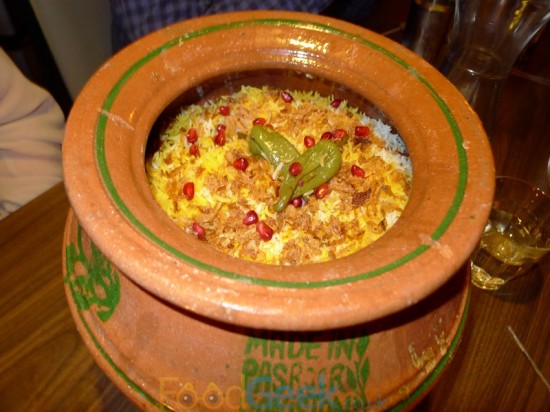 Two meat dishes; ‘Matka Chicken’ made with slow cooked chicken legs and ‘Sindhi Biryani Gosht’, slow cooked lamb on the bone, layered & steamed with basmati rice. ‘Dahi Pulki’ is a traditional Pakistani yoghurt dish to be served alongside the Biryani.

Despite not being a huge fan of coconut even I loved the ‘Goan Fish Curry’ which was one of the more popular dishes. Haddock braised in coconut cream with curry leaves & mustard seeds was hot, spicy and creamy with perfectly cooked fish.

My favourites though were the two vegetarian dishes; ‘Khattay Aloo Bhaingan’, spicy aubergine and potato with imli and crushed black pepper and ‘Chana Daal’, a hearty stew made using split lentils. I consider myself a bit of a Daal aficionado and I reckon this was better than the Daal on the regular menu at Mughli, I suggest that Mamma Mughli gives the chef her recipe.

All were served with what appeared to be an unlimited supply of ‘Chole Chawal’ (rice & chickpeas) and garlic naan fresh from Mughli’s charcoal pit. 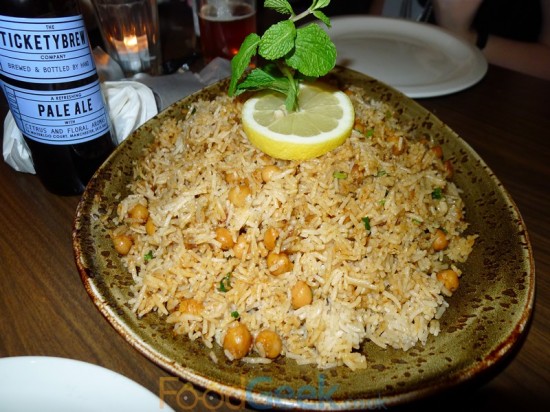 Naturally I ate some of everything, quite a lot of most things as it happens and by the end was struggling to even move let alone even consider eating another thing. Thankfully Haz seemed to have anticipated this and rather than dessert served an after dinner ‘Bailey’s Milkshake’. Appropriate both for the time of year and as the namesake of the evenings organiser. It was a sweet, creamy boozy delight, even the non-Baileys lovers amongst us happily polished them off. 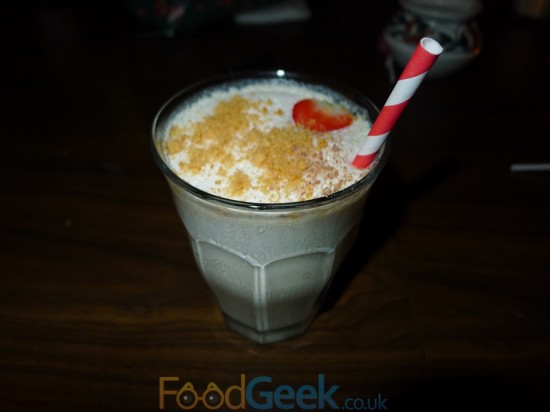 By the end of the night we were all totally stuffed and everybody waddled off very happy. I can’t thank Bailey enough for organising the event and Haz for making it happen. To feed 16 highly opinionated food bloggers at once is an achievement in itself but to have us all raving about the food as well shows how great a place Mughli is. Finally, very special praise has to go to Mamma Mughli who’s crockery and recipes were very much enjoyed and appreciated.