There’s a board outside Shalom II which states that they serve “the best ribs in town”. It certainly grabbed my attention but as I consider myself a bit of a rib connoisseur I would be judging for myself. I came back later to find out. Unfortunately just as I sat down a table of 20 arrived completely unannounced, filling almost half of the outside tables. After that I was expecting service to be slow but to the credit of all the staff it wasn’t at all.

Shalom II is a dutch restaurant so we didn’t get the usual Portugese couvert of bread & olives, instead we got bread with a soft white cheese. It was a welcome change, the cheese was really good. Next up were the ribs. They looked very impressive with a really dark crust. Biting into them was incredible, they really did just fall off the bone and melt in the mouth. The sauce was very nice too, a thick & rich BBQ sauce. It was a good BBQ sauce but personally I like a bit of chilli heat with my ribs, that’s my only complaint as otherwise they were stunning and the board is very probably true. 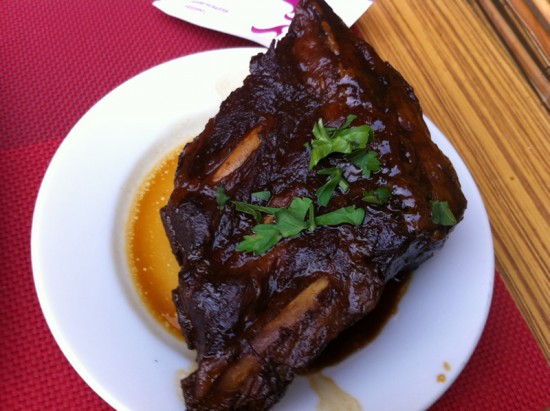 Not only do Shalom II do the ‘best ribs in town’ they also offer ‘all you can eat’. So of course I ordered another portion once the first had disappeared. They arrived quite quickly and were just as good as the first. After I demolished the 2nd plate the staff came over to ask if I would like a third. After very long and careful consideration I decided against it, only because I wanted to try the desserts. I was genuinely impressed that they offered the 3rd portion themselves, whilst I knew they would standby the ‘all you can eat’ deal they went out of their way to find out if I wanted more which was much appreciated. The ribs were served with potato wedges which were crispy and delicious. So much better than the chips we’d had at various places nearby. Maybe it’s because they’re Dutch and not Portugese?

As well as the ribs Shalom II seems to be famous for their pancakes. There is a large selection of savoury pancakes on the menu as well as desserts. We ordered a portion of Mini Chocolate Pancakes. The pancakes were good and covered with sticky chocolate sauce and cream. Not up there with the quality of the ribs but pretty decent pancakes all the same. We also ordered another dessert, I can’t remember it’s name on the menu but it was something like ‘Dutch Cookies’ or similar. It certainly didn’t sound anything like it actually was when it arrived. Firstly it came in a glass which was surprising when we thought we’d ordered cookies! It was basically a glass of ice cream, with broken up pieces of caramel biscuit topped with toffee sauce and macadamia nuts. It was interesting and quite nice, i’m sure many people would love it but was perhaps a little too sweet for my liking. 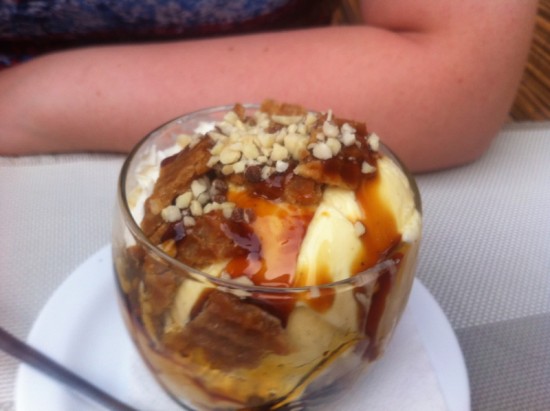 So the ribs definitely lived up to the claims and they deserve the reputation they obviously have locally. It’s not just about the ribs though, the other food was decent and it’s excellent value. The staff were brilliant and you’d never have known that we’d arrived at the same time as a table of 20. The only downside was finding out during the meal that they don’t take credit cards, although at least I got to burn off some of the calories i’d put on from eating 2 plates of ribs whilst running to the nearest cash machine.

Follow @FoodGeekUK
There’s a board outside Shalom II which states that they serve “the best ribs in town”. It certainly grabbed my attention but as I consider myself a bit of a rib connoisseur I would be judging for myself. I came back later to find out. Unfortunately just as I sat down a table of 20 ...