I don’t claim to be an expert in Japanese food, in fact, i’ll probably never be an expert in any cuisine since my tastes are so wide and varied. I have been fond of Japanese food though since visiting an amazing restaurant in Barcelona almost 10 years ago. It’s a cuisine I have neglected in recent years until a very enjoyable trip to Yuzu last year rekindled my love of Japanese food & culture. Shortly after that visit I heard about another Japanese restaurant in Manchester which has been getting rave reviews and unlike Yuzu, this one also serves sushi which is very exciting as the main reason I’ve neglected Japanese cuisine is that decent sushi places are unfortunately rare around Manchester.

UmeZushi is situated in one of the units on Mirabel Street, under the arches opposite Manchester Arena. It’s a tiny place that only seats 19 people, there are a few tables and a wooden bench that runs around the kitchen area. The decor is an odd mix of authentic Japanese and Spanish art, strange but I liked it. I’m always fond of open kitchens and it seemed somehow even more impressive given the size of the place, sitting on the benches you’d be able to literally watch the chefs every move.

I was pleased to find that as well as Asahi which I love they also serve one of my new favourite beers Estrella Inedit, created by culinary legend Ferran Adrià. Mrs FoodGeek was less impressed that the wine list didn’t feature a plum wine, she had to settle for a bottle of unauthentic Australian white, though it did turn out to be very nice. They also have an excellent range of sake.

We started with a pickle platter; a selection of daikon, cucumber & beetroot which was perfectly decent, especially the daikon which was delicious. Though the beetroot tasted no better than pickled beetroot out of a jar and the cucumber was not particularly interesting either. It was enjoyable but not even close to the mind blowing pickles I had at Yuzu which I just couldn’t help comparing these to. 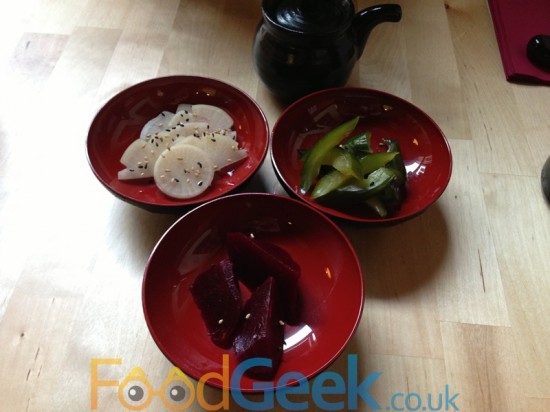 It was the sushi that I was most keen to try as I’ve heard so many good things about it and when it was presented to us I immediately understood why. We’d ordered both the vegetarian and fish ‘Chefs Choice Sets’ and they both looked absolutely beautiful.

Each plate contained 3 different types of perfectly formed sushi; Hosomaki, Umrmaki & Nigiri, each made up with various ingredients including tiger prawn, sea bream, tuna, salmon and swordfish in the fish selection and avocado, pepper & cucumber for the vegetable selection.

The rice was cooked and seasoned to absolute perfection while the fish was exceptional quality and had obviously been prepared by somebody with expert knife skills. All looked and tasted amazing with the tuna Nigiri and both the tiger prawn & avocado Umrmaki particular highlights. There are no words to express how good the tuna & salmon Nigiri was, the fish literally melted in my mouth and the taste was unbelievable.

The sushi was served with customary soy sauce, wasabi & pickled ginger. I’m not a massive wasabi lover but do try to like it and this was easy to like. Easily the best i’ve ever tasted, not as powerful as some and also had a creaminess that i’ve never experienced before. Interestingly it was much less green than usual too, I wish I knew if the colour was related to the taste. 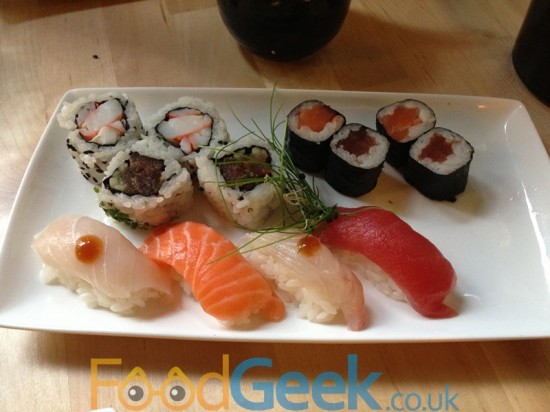 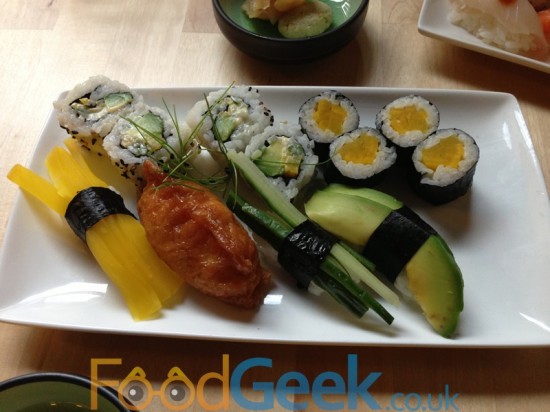 UmeZushi are also well known for their tempura with many claiming it’s the best in Manchester. They offer either vegetable, seafood or mixed. Since we wanted both, the mixed would have been a sensible option but we decided to be greedy and get separate portions of both the vegetable and seafood instead.

The tempura, just like the sushi was fantastic and their reputation well deserved. By far the crispiest, lightest batter i’ve ever had and most of the various bits and pieces tasted good too. The vegetable tempura contained peppers, courgette, baby sweetcorn, green chilli and sweet potato. I found the courgette a little bland but the others were really good, particularly the chilli and sweet potato.

The seafood selection was excellent too, it contained tiger prawns, white fish and squid which was especially good. 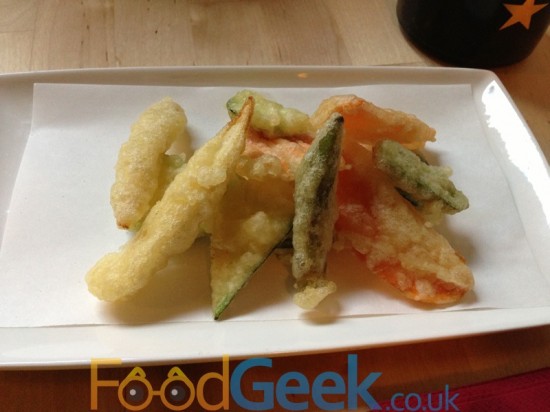 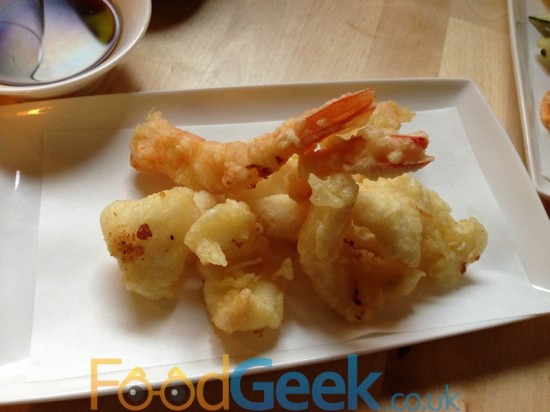 There are no permanent hot dishes on the menu at UmeZushi, instead there is a specials board which features a ‘Hot Dish Of The Day’ (confusingly there were 3 dishes on it). I chose Roasted Pork Udon as I love pork and I love Udon dishes.

A large portion with a generous amount of delicious moist roast pork in an umami rich miso broth with wilted pak choi and soft noodles. Everything was cooked well, particularly the melt in your mouth pork and it tasted great, although personally i’d have loved some chilli in there too. 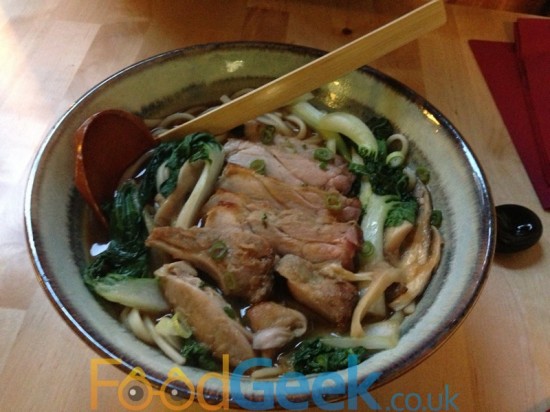 It would be rude to eat at a Japanese restaurant and not sample the Miso soup, it was really good. Lighter than some but still packed with deep savoury miso flavour with tiny cubes of tofu and fresh chopped spring onions. 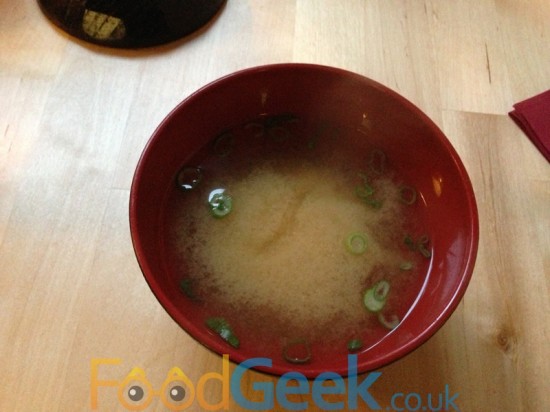 Our final dish was a side of Braised Burdock Root which i’d never had before. I really loved the flavour of the earthy burdock and the combination with the carrot & beetroot and light dressing was delicious. A really interesting, light but very hearty & tasty side dish. 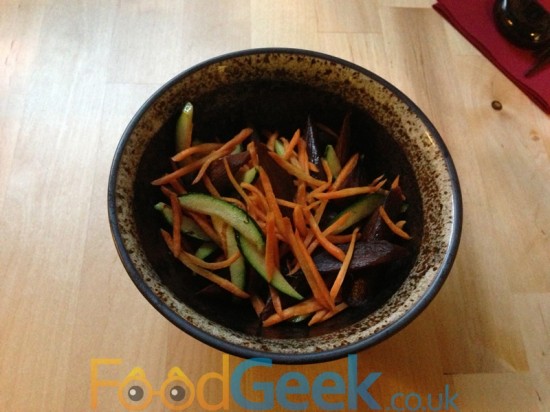 I’d heard that the desserts at UmeZushi are not particularly inspiring and I would agree that whilst the carrot cake we had first was quite good I don’t really see the point in serving bought in cakes. Luckily they also had ‘Banana Tempura’ which was brilliant. Slices of warm banana coated in more of that light, crunchy tempura batter and served with a good vanilla ice cream & cherry sauce. It felt like exactly the right dish to end a meal like this and plays to their strengths as the tempura batter really is excellent. It was delicious and although I’m fairly sure it isn’t a genuine Japanese dish it at least feels authentic. 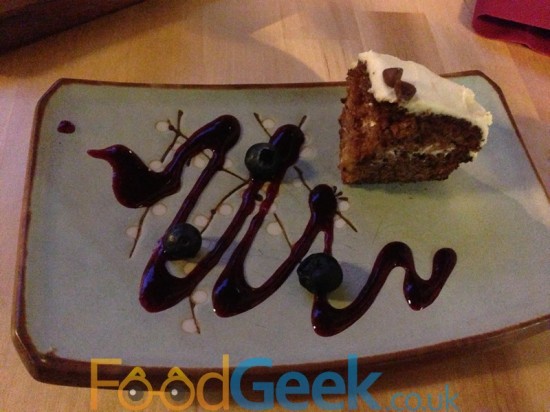 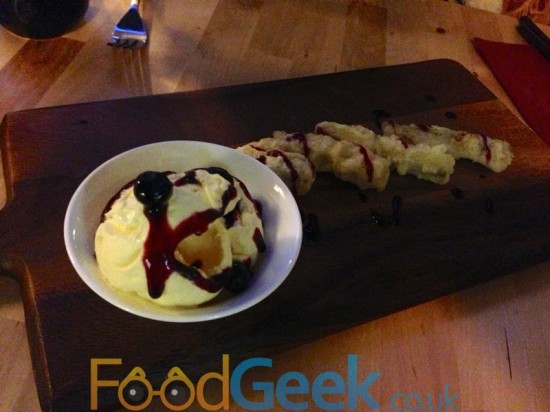 I loved almost everything about UmeZushi and have been thinking about the sushi a lot since my visit, I can’t wait to get back and try some more. I’ve also been wondering whether I preferred UmeZushi to Yuzu and in the end decided that they’re both great in different ways. The sushi here is an obvious advantage but Yuzu has a much wider range of dishes, some of which are really excellent. I’m grateful that Manchester has two fantastic Japanese restaurants and that rather than competing with each other they almost compliment each other.

Follow @FoodGeekUK
I don’t claim to be an expert in Japanese food, in fact, i’ll probably never be an expert in any cuisine since my tastes are so wide and varied. I have been fond of Japanese food though since visiting an amazing restaurant in Barcelona almost 10 years ago. It’s a cuisine I have neglected in ...

Previous: Have You Tried A.N.A.L?
Next: A Quick Trip To Mughli In Rusholme