I recently made Stosie Madi, head chef of the Parkers Arms blush when I said her ‘Good Friday Fish Fest‘ was one of the highlights of my year. It’s true though, despite eating out around 50 times since, including several fine-dining restaurants – some with 2 Michelin stars – Stosie’s food is still some of the most memorable.

Being the end of March it was snowing when I last visited, I promised i’d be back when the weather was better so we could enjoy the beautiful surrounding countryside. Unfortunately I seem to have not only missed summer but also chose one of the worst days to take an hours drive into the Ribble Valley, having to pass through several torrential rain storms and flooded roads. It didn’t matter, Stosie’s stunning food and generous hospitality more than made up for the bleak weather, not to mention the charm and jokes of delightful front of house manager AJ.

The main purpose of the trip was to sample the ‘Gamekeepers Menu’, a special 5 course set menu that marks the start of the grouse hunting season. Of course we ended up ordering several other things from the regular menus and on top of that Stosie very generously sent out lots of other tasters for us.

Starting with homemade Elderflower Pressé. It wasn’t the best weather to enjoy such a refreshing summery drink but it was so delicious we forgot all about the rain hammering at the windows. 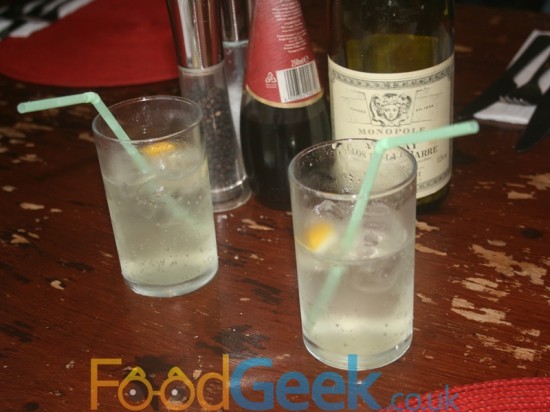 Next we received what can only be described as heaven in a basket. A selection of crunchy, and I mean crunchy bits and pieces including the best potato skins ever, pork crackling and incredible crispy duck skin. Served with excellent homemade tomato and sweet onion chutneys for dipping. 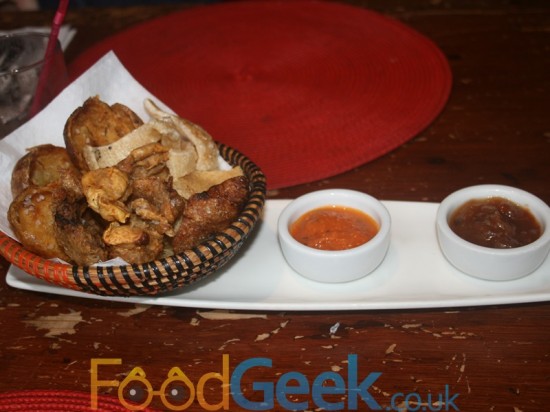 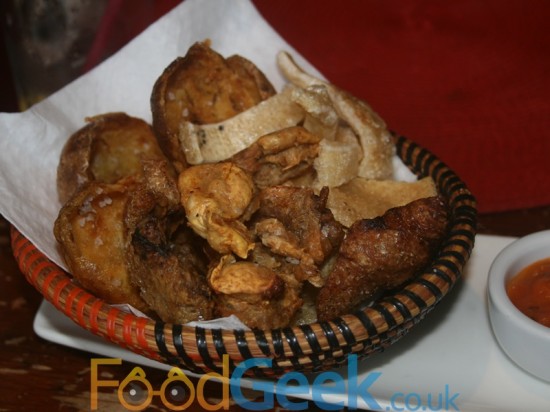 More treats from the kitchen came in the form of two stunning salmon dishes. The first; home cured salmon with watercress, horseradish, pickled cucumber & elderflower jelly was light, fresh and delicious. Every flavour was distinguishable but married together to make a beautiful yet stunningly simple dish.

The second; equally good salmon sat upon crispy homemade rice crackers with watercress and a little fennel was again a beautiful balance of flavours and a very accomplished dish. 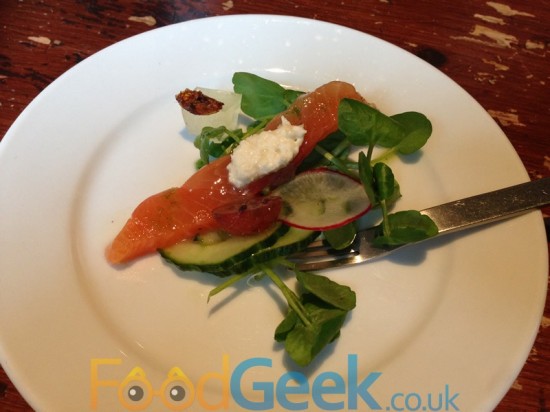 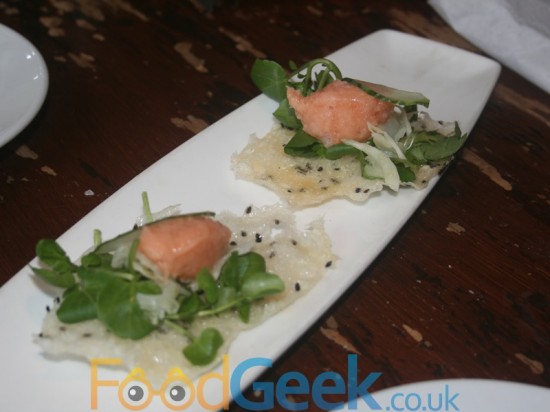 We were in cheesy, comfort food heaven with the next taster. ‘Three Cheese Soufflé’, I love a soufflé in any flavour, sweet and savoury and these were excellent. A crisp exterior with a wonderfully light inside and masses of cheese flavour. Despite having already eaten so much already with lots more to come I could have eaten a plateful of them. 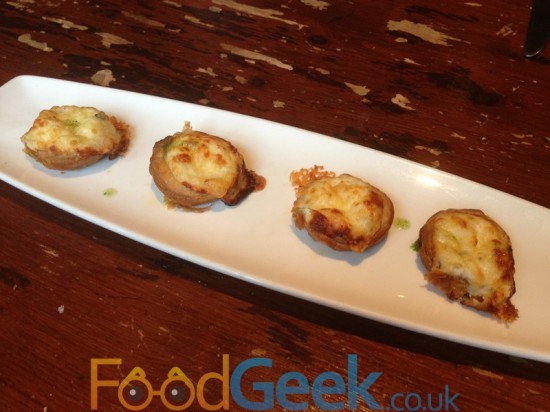 Eventually we received something that we’d actually ordered, the canapés from the Gamekeeper menu were crispy, light and fluffy potato fritters with gorgeous homemade mayo. 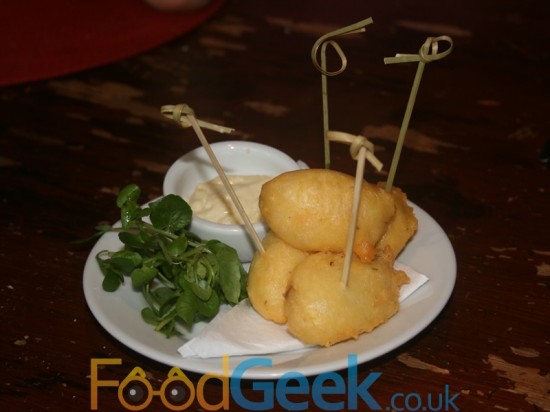 The starter from the Gamekeeper Menu was ‘Venison & English Onion Soup’ with stock made from local estate shot venison.Not only was it an incredibly tasty bowl of soup but it somehow managed to be rich and comforting yet at the same time extremely light. The Lancashire cheese topped toastie in the centre a perfect accompaniment, the melted cheese combined with the soft onions was a delight. 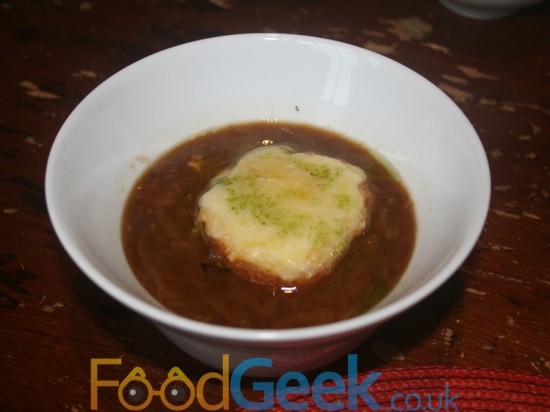 We also ordered a few extra starters from the specials menu. The first ‘Venison Carpaccio’ blew me away. Not only is it by far the best venison dish i’ve ever eaten, it’s also the best capriccio i’ve ever eaten and quite possibly one of the best meat dishes i’ve ever eaten. The venison itself was simply out of this world, meltingly soft and tender with just a light sear on the outside and a peppercorn crust whilst the accompanying baby damsons and damson jelly just burst with sweet, fruity flavour that complimented the meat beautifully. 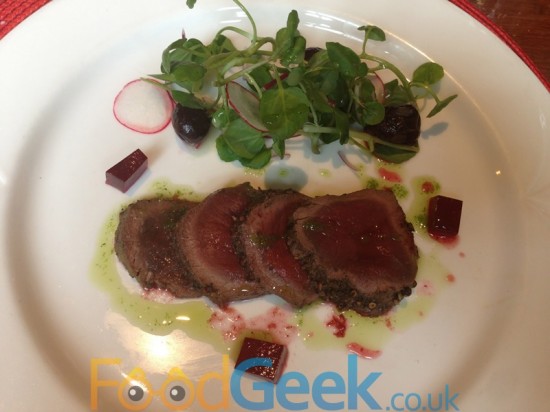 The other starter was a ‘Cheese Scone’ and was also superb. Fluffy and light as a feather it was almost like a muffin but with a savoury cheese flavour. 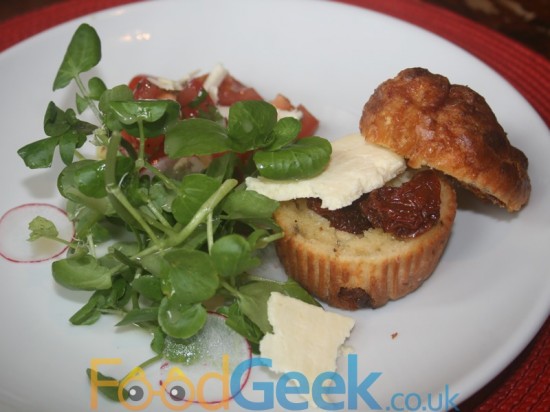 Black pudding is one of my favourite things but even that didn’t prepare me for how good the ‘Black Pudding Sausage Roll’ was. Amazing soft and slightly spiced black pudding encased in buttery flakey pastry was just phenomenal. The homemade piccalilli on the side was fantastic too. 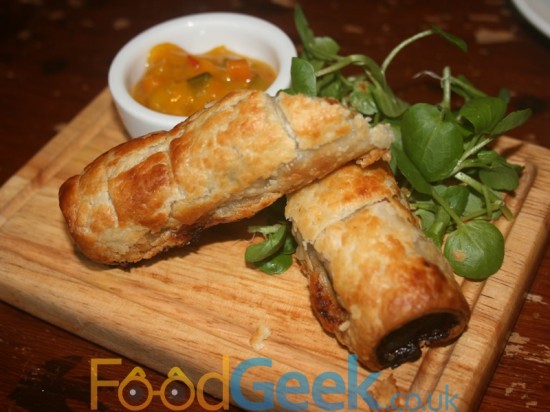 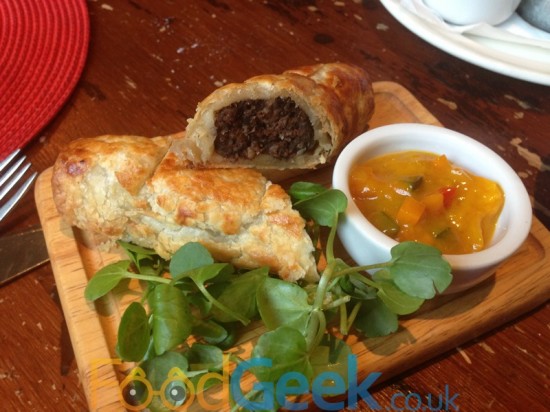 We’d eaten and enjoyed so much by this point we almost forgot the reason we’d come was for grouse! The main course of the Gamekeeper menu was a whole roast grouse each with it’s heart & liver served on a skewer along with a piece of bacon that protected the breast during cooking and a slice of bread. The locally shot bird was cooked to perfection, supremely moist and pink with a rich, slightly gamey flavour. 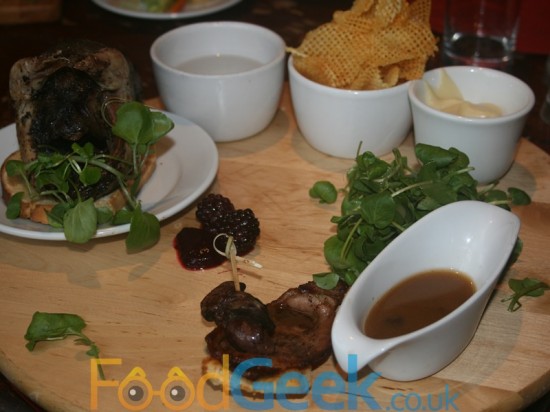 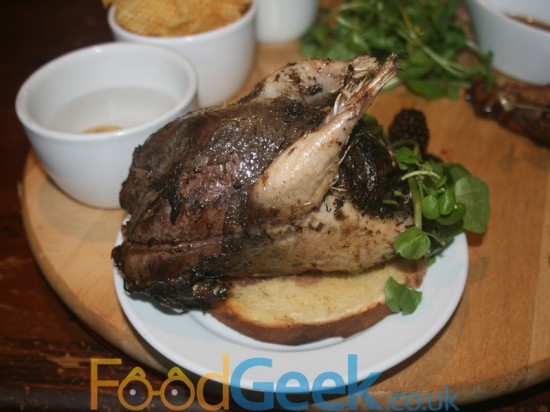 We’d ordered a couple of side dishes to go along with our main courses, seasonal vegetables were simple but perfectly cooked and seasoned with a hint of butter and lemon. 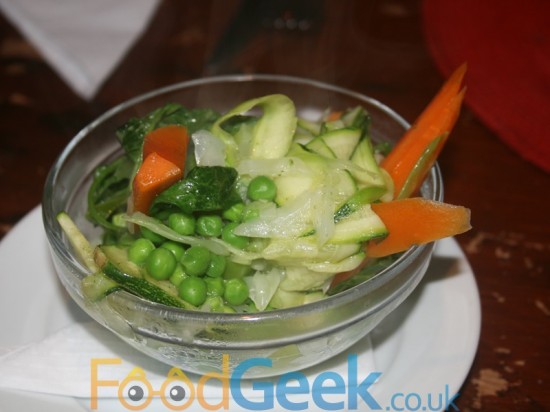 The only item  I can make any sort of criticism of were the ‘Triple Cooked Chips’. There was absolutely nothing wrong with them and they’re far better than what most places try to pass off as chips. But I consider myself a bit of a chip connoisseur and always compare them to ‘The Hinds Head‘ and these were not at that level of supreme crispiness. There’s no shame in not being as good as the Michelin starred pub/restaurant owned by the chef that invented them but I have to admit that my own are slightly better too (sorry Stosie!). 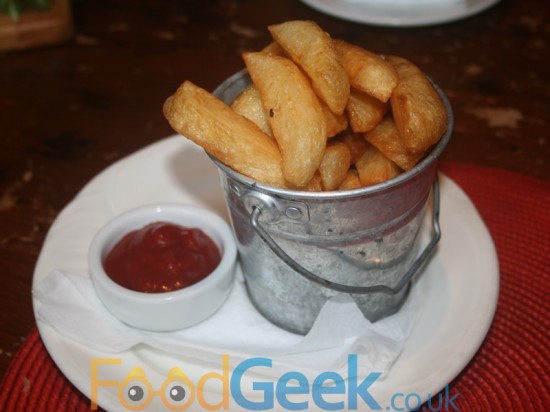 The dessert on the Gamekeeper menu was an ‘Egg Custard Tart’ similar to the Portuguese Nata i’ve developed a love for lately. It was probably the best i’ve had yet, served warm the wonderful pastry case contained the perfect consistency of creamy custard. Served with luxurious cream topped with an elderflower marmalade. 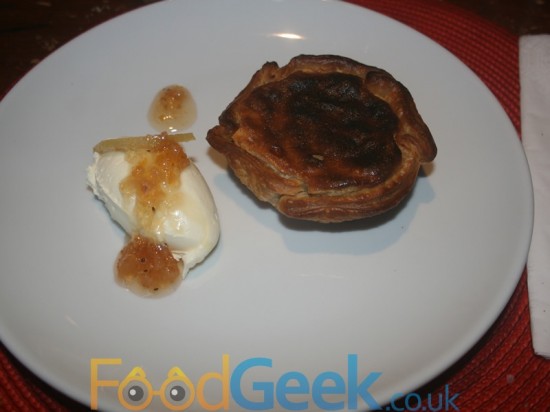 We couldn’t resist ordering the ‘Peanut Butter & Chocolate Cheesecake’ too and despite being completely stuffed by this point we thoroughly enjoyed it. 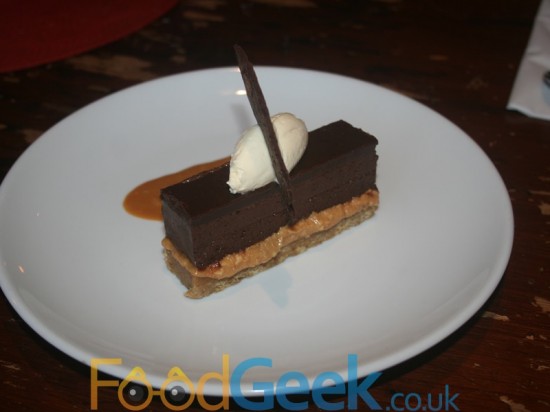 I was so full I could barely stand up but thought i’d successfully made it to the end of this epic feast when another 2 plates arrived. Containing the 5th course of the gamekeeper menu ‘Sweetmeat’, small pieces of the Parkers Arms signature dessert ‘Wet Nelly’ that tastes a bit like a mince pie but with a softer, gooier centre. I really enjoyed them and will definitely be ordering the larger version next time i’m at the Parkers Arms.

The other plate was one last gift from Stosie, chocolate meringues filled with Chantilly cream. We contemplated taking them home for later but they looked so good we changed our mind 5 minutes later, they were as good as they looked. 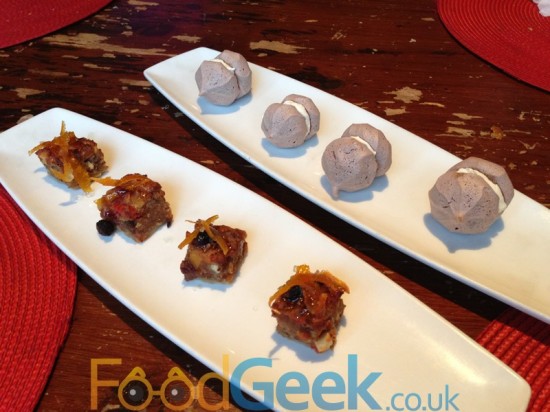 The food at the Parkers Arms is unbelievably good, as I said last time the only pubs i’ve ever  eaten in with a higher standard of cooking are Tom Kerridge’s 2 Michelin starred ‘The Hand & Flowers‘ and Heston Blumental’s ‘The Hinds Head‘ but they’re a lot closer than you’d expect. Stosie was recently awarded the title of Craft Guide of Chefs Pub Restaurant Chef 2013 which on this evidence is thoroughly well deserved and i’ve no doubt many more awards will follow.

Service was great, AJ is the perfect host and the other members of the front of house team worked well with him. It’s also extremely good value for money (even without the freebies from Stosie) for food of this standard.

I can’t say enough good things about the Parkers Arms, if you haven’t been yet I urge you to do so. It’s a bit out of the way but it’s well worth the effort.

Follow @FoodGeekUK
I recently made Stosie Madi, head chef of the Parkers Arms blush when I said her ‘Good Friday Fish Fest‘ was one of the highlights of my year. It’s true though, despite eating out around 50 times since, including several fine-dining restaurants – some with 2 Michelin stars – Stosie’s food is still some of ...

Previous: Aumbry, Prestwich – Back On Form (Not That It Ever Really Wasn’t)
Next: Stolen Lamb, Wilmslow – Modern Greek Food (But Be Careful What You Order!)