Stolen Lamb, Wilmslow – Modern Greek Food (But Be Careful What You Order!)

I’d never been to Wilmslow and didn’t know much about the place other than it’s an affluent town and home to footballers and Coronation Street actors. I’d been hearing good things about Stolen Lamb though, a family run Greek restaurant serving modern food so decided to venture all the way to south Manchester to try it.

It’d been many years since I last ate in a Greek restaurant but I have fond memories of several huge meze feasts at Sokrates in Horwich, Bolton. Although both Greek, that’s where the similarities end as they’re very different places in everything from the the decor to the style of food and service. While Sokrates is rustic and traditional Stolen Lamb is elegant and modern, I was pleasantly surprised by the stylish decor. 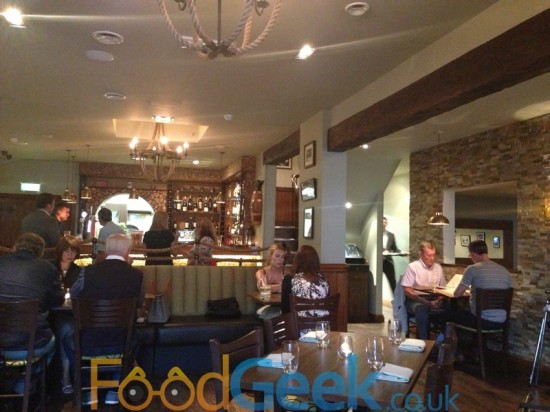 As well as the regular menu Stolen Lamb also offer a Meze menu featuring small portions of traditional dishes like Moussakka and the ‘Symposium Menu’, a 5 course tasting menu containing more modern dishes. We chose the Symposium menu with the wine pairing option.

Thinking that the dishes sounded quite light and expecting them to be on the small side (or if i’m honest just because i’m greedy) I tried to order the ‘Mini Mezze’ from the regular menu too, a choice of 4 of their starters. However, the waiter was adamant I wouldn’t be able to manage the 5 courses if I did and wouldn’t accept the order! He did say that he’d check with me after course 3 and if I was still hungry i’d be allowed to order more then, which was nice of him!

I was still getting over the shock of being told off for ordering extra food when we were offered complimentary pitta bread with olive oil, roasted aubergine and black bean hummus dips. It was an enjoyable start to the meal, the dips were tasty although the black bean hummus wasn’t as good as my own version. 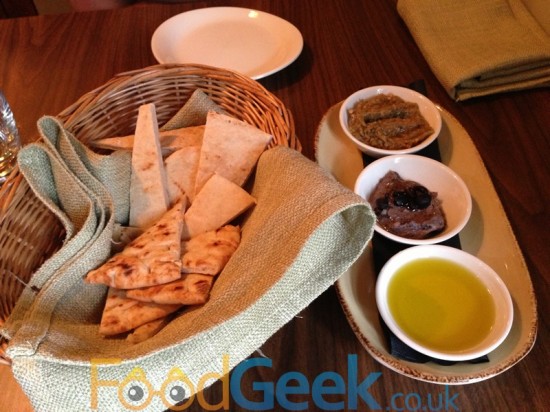 The first course was described simply as ‘Greek Garden’ on the menu. I was expecting some sort of salad so was surprised to see it arrive looking very sophisticated in a cocktail glass. A fresh and flavourful cucumber gazpacho with sweet pressed plum tomatoes and topped with a refreshing lemon sorbet. Garnished with olives and an edible bread ‘cocktail’ stick it was quirky and clever but tasted great too. 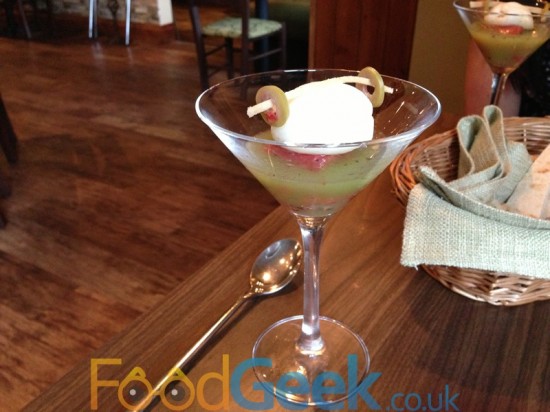 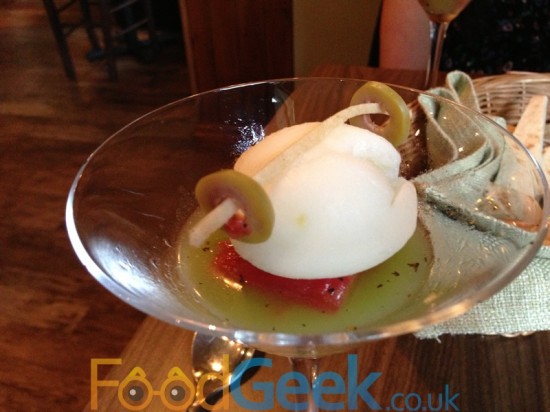 The fish course ‘Barpourni’ was my favourite of the night. A well cooked piece of baked red mullet, with a couple of prawns and a mussel but the highlights of the dish were the delicious caramelised fennel and stunning smoked mussel sauce. 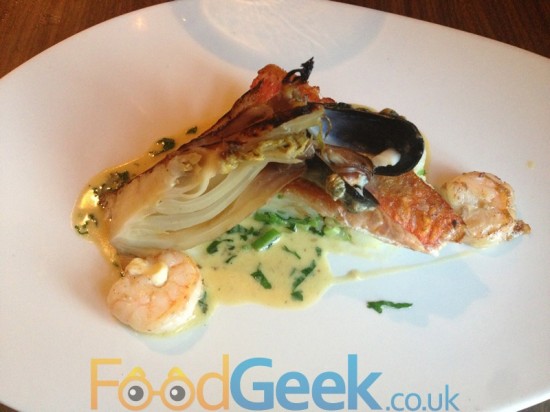 Course three, described as ‘Bandits Breakfast’ was another innovative dish. A crispy, runny yolked egg sat upon smoked wild boar, with a couple of giant beans. I really enjoyed the soft, smokey, meaty boar which worked perfectly with the crispy, runny egg.

In the photo below as well as the ‘Bandits Breakfast’ in the middle you’ll notice another two dishes. These were brought out with the 3rd course and described simply as “a couple of extras to help fill you up”. I found it odd after the warning earlier but enjoyed them all the same. The ‘Saganaki’, prawns topped with feta in a tomato and garlic sauce was simple but very tasty. Similarly the Halloumi, one of my favourite things in the world was simply coated in a sesame seed crust and served on a bed of spinach, black beans and sweet onion.

We were never asked about the additional starters I still wanted to order but since we’d had these two extra mystery plates I decided not to bother mentioning it again. 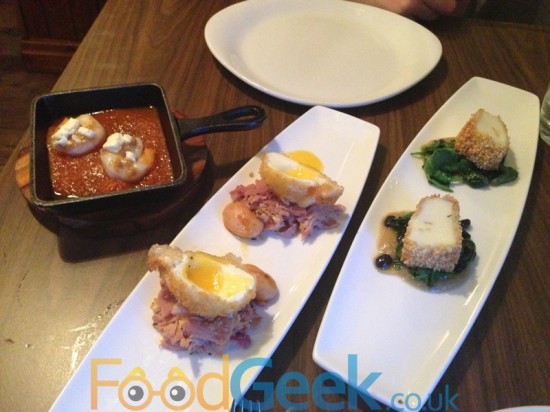 The main course ‘Kleftiko’ is the restaurants signature dish, naturally it consists of  Cheshire lamb, slow cooked in their wood fire oven until it melts in the mouth; with peas, artichokes and lovely crispy potatoes. Also ‘mum’s famous dolmades’, a vine leaf parcel stuffed with minced lamb and rice which was equally tasty. The whole dish was held together by a beautiful sauce and was a joy to eat. 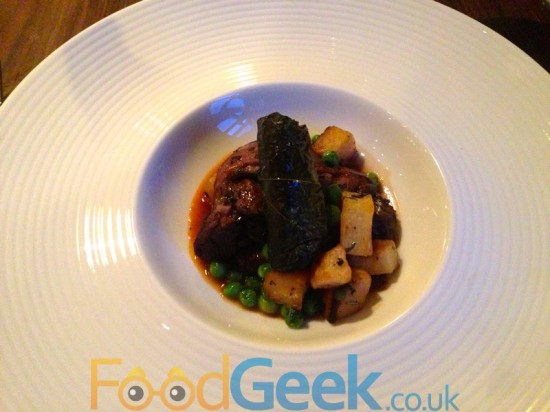 Dessert was Greek yoghurt topped with pistachios and served with a glass of water containing a handful of sticky walnuts. We were told to drink the water and then eat the walnuts with the yoghurt. The walnut flavour had infused with the water slightly but it was still a bit, well, watery. The luxurious thick, sweetened yoghurt was delicious with the pistachios and the interesting, if a little odd sticky walnuts. It was the first time I’d eaten whole walnuts including the shell and I’m not totally sold on them. 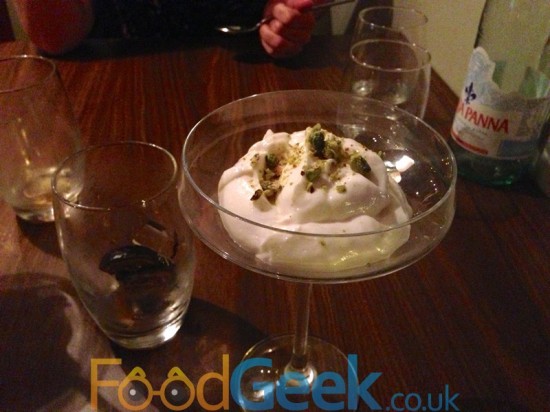 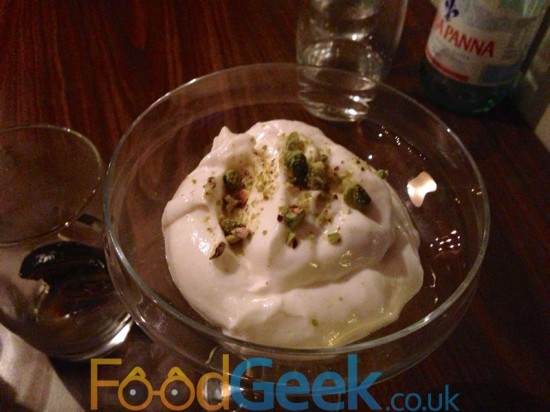 At the risk of being shouted at for eating too much I dared to order an additional dessert, ‘Galaktoboureko’. Although I soon wished I hadn’t. Described as ‘rosewater and vanilla semolina pudding, cherry vissino, toasted pistachio’ and Google told me that it’s a classic Greek dessert, ‘a combination of creamy custard and flaky phyllo dough’. Both sounded great but unfortunately neither description was even close to what I received.

The main tart was indeed a combination of semolina and custard but it wasn’t creamy, it was cold, hard and dense. Bland too, certainly no rosewater or vanilla flavour and there was no pastry anywhere to be seen, instead a sprinkling of sugar that had been caramelised with a blow torch. The ‘cherry vissino’ was actually just a dollop of jam dumped on the plate. The only redeeming feature of the dish was the crunchy biscuit on top which obviously wasn’t ‘toasted pistachios’ but was light, sweet, crunchy and far more enjoyable than the main component. I’m guessing here but I suspect they didn’t actually have everything they needed for this dish and shouldn’t have sold it. But they did and just cobbled together what they could. 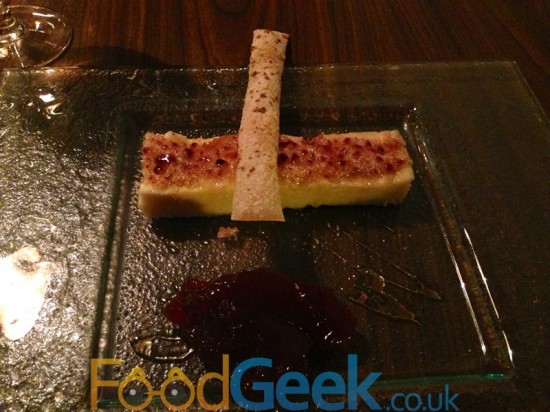 We’d enjoyed almost all of  the food, everything with the exception of that final dessert but drinks were less successful. The wines with the tasting menu were all Greek & Cypriot which I was impressed by but unfortunately we didn’t particularly like most of them. Especially the reds which tasted cheap and harsh. Not being very experienced in Greek wine I can’t really say if they were a fair representation or just cheap wines but we certainly didn’t feel that they were worth the £20 each that the pairing cost.

The cocktail we had was even worse! Described as ‘a bit like a Cosmopolitan with a couple of different ingredients’. After one sip it was immediately obvious that the difference was they’d replaced the Cointreau with something with an awful artificial orange flavour. Possibly a cheap orange liqueur, more likely cheap orange cordial. It was shockingly bad. 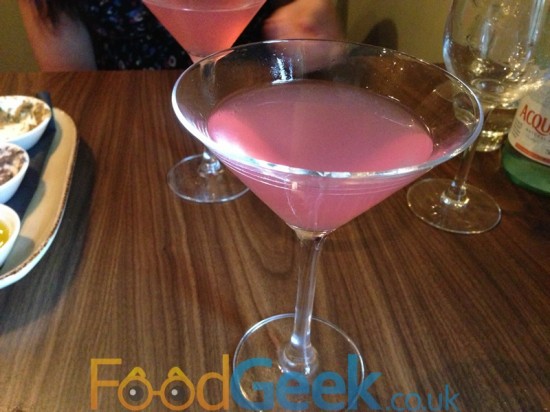 Service was mostly friendly and efficient but I was still shocked by being told not to order the mini meze. Though not as shocked as when I received the bill and noticed a £10 charge for ‘MISC FOOD’. I queried this, genuinely expecting it to be an error but was told that it was for the extra dishes we had! That would be the 2 extra dishes that I didn’t choose which were brought out without my knowledge after being told I couldn’t order what I wanted. His explanation was simply that he “thought i’d be happy to try anything”. Sorry, but when i’m paying I like to chose what it’s for.

To sum up what happened here: I asked to order the ‘Mini Meze’ where I could chose any of their 4 starters. He told me not to as it would be too much food but said he’d check with me after course 3 to see if I still thought I could manage them. He didn’t. Instead, he sent out 2 extra dishes – that I hadn’t picked – with the third course. And then charged me £10 for the privilege.

To be fair, after telling the waiter I wasn’t impressed by being charged for dishes I didn’t order he removed them from the bill but I was and still am baffled by the situation.

So it really was a night of ups and downs. Overall we still had a good time despite the ordering thing, the cocktail being awful and the wine below average and overpriced. I liked the atmosphere and surroundings but mainly because most of the food was excellent, a couple of the dishes exceptional. I think i’d like to go back, possibly for the ‘Symposium’ menu again if the dishes change or perhaps to try some more traditional dishes on the Meze.

Follow @FoodGeekUK
I’d never been to Wilmslow and didn’t know much about the place other than it’s an affluent town and home to footballers and Coronation Street actors. I’d been hearing good things about Stolen Lamb though, a family run Greek restaurant serving modern food so decided to venture all the way to south Manchester to try ...