Last week Manchester was transformed into a garden city with tress, flowers and even a forrest transported to the city centre streets. It was all in aid of ‘Dig The City’ festival, an event aimed at encouraging us to ‘grow our own’. With such an interest in food I’m probably their target audience but as somebody who’s barely managed to grow a single seed and even struggles to keep a supermarket bought basil plant alive until it’s ‘Sell By Date’ I’ve long since given up on growing things.

I am however a big fan of eating well grown produce and there is surely nobody doing it better than Simon Rogan at the moment. His 23 acre farm just minutes away from his 2 Michelin star flagship restaurant L’Enclume supplies much of the top quality produce that goes into the dishes at Simon’s various restaurants.

Making him a perfect choice for creating a special ‘Dig The City’ tasting menu. Together with Andrew Tomlinson, head chef of recently closed London popup ‘Roganic’ and Adam Reid of The French the menu was described as “a twist on the edible garden” and contains some of the best dishes from Roganic. It was available for just once week between the 6th – 10th August, I went along to try it on the second day.

It was my 3rd time at ‘The French’ but walking into the dining room was just as impressive as previous visits. I’ll never get bored of looking at the stunning glittery ball. I’ve noticed it get’s sparklier the more wine you drink too. 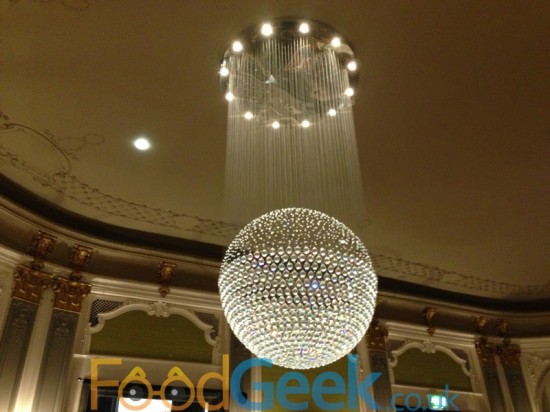 Shortly after taking our seats and having a chat with the lovely Kamila we were again treated to a complimentary glass of Nyetimber. A sparkling English wine which is fast becoming my favourite aperitif, it seems to get better every time I have it and can certainly rival any Prosecco or even Champagne that I’ve ever tasted. 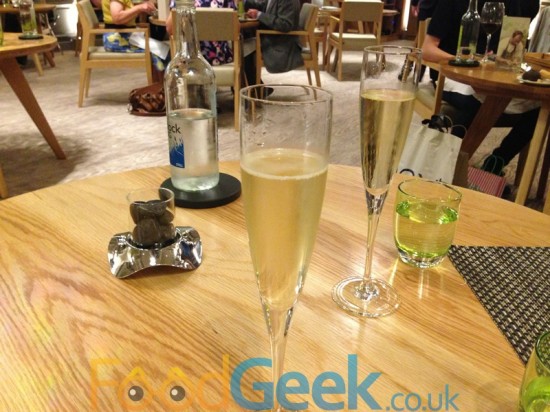 The ‘Dig The City’ tasting menu was available in The French’s usual 3, 6 or 10 courses. Naturally we opted for the 10 courses and like usual there were a few small tasters or amuse bouche first.

All three were equally sunning in very different ways. The first: ‘Pig and eel with hay emulsion’ a surprisingly brilliant combination of meaty, slow cooked pork and smoked eel with earthy notes from the hay and mushroom powder. 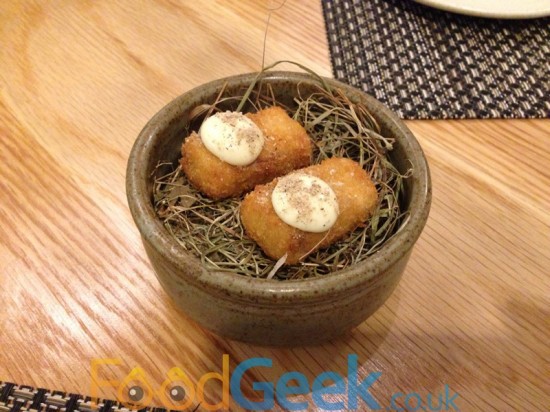 Pig and eel with hay emulsion

The crispy crab bread topped with fresh crab meat and samphire was a wonderful combination of textures and flavours of the sea. 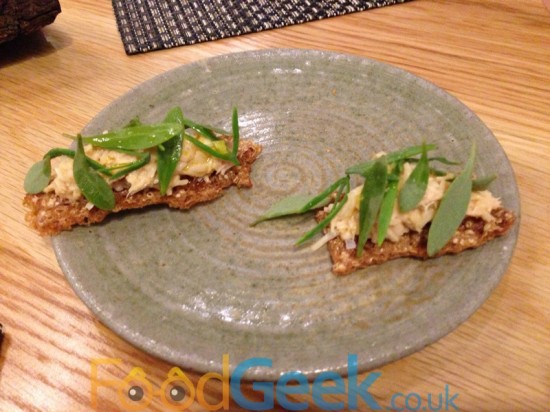 Floral and sweet aren’t usually words I’d use to describe one of the standouts dishes of a meal but the final amuse of ‘Celery glass, fresh cheese, flowers & herbs’ was exactly that. The clever celery ‘glass’ had been made by setting celery juice to make an edible bowl topped with soft, creamy goats curd and beautiful edible flowers. A simply stunning mouthful of food. 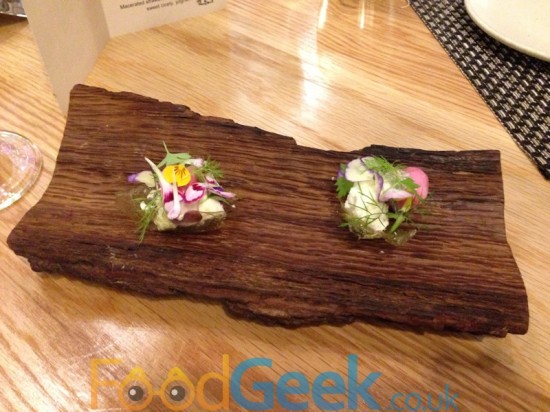 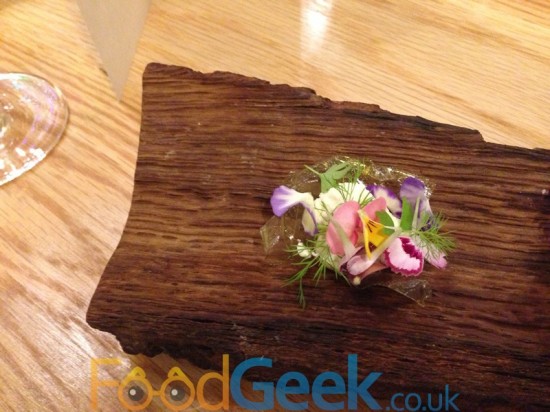 As the name suggests ‘Grown up yolk from the golden egg’ isn’t actually an egg but rather a chicken mousse set and encased in shimmering edible gold to look like a yolk. Topped with mustard cress it tasted great and the dried salt & vinegar rice and garlic were an unusual texture but one that I enjoyed. 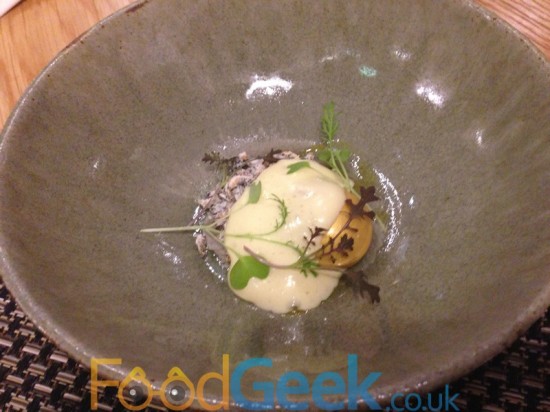 Grown up yolk from the golden egg, salt and vinegar rice and garlic

The familiar breads made another appearance but the wholemeal bun made with beer from local Holt brewery is now much darker and as a result has a deeper malt flavour which I absolutely loved. 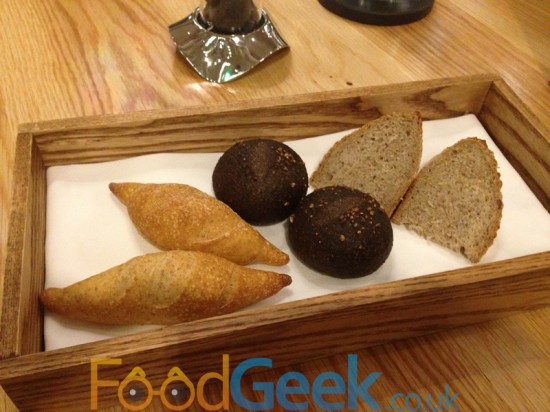 Before tasting I had no idea what ‘Westcombe dumplings’ were but I did notice a man at a nearby table pull his face whilst trying his. Within moment of the dish arriving it became obvious from the aroma that it was in fact a cheese dumpling. After trying it I could understand his face, personally I loved it but I can imagine it would be too much for anybody not a lover of strong cheeses. It was a deliciously soft dumpling with a strong, mature cheese flavour. Having been slightly disappointed by truffles lacking in flavour recently that thankfully wasn’t a problem here. 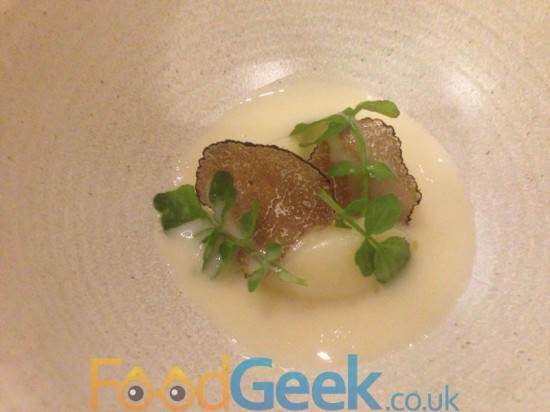 It’s always dangerous ground messing with classic dishes and The French’s ox tartare dish is already a classic. My favourite dish on both previous visits and the one I hear people talking about the most. On paper it sounded like I should love this reworking ‘Raw ox in coal oil, assorted onions, hyssop, mustard mayo’ and there was much to admire. It looked just as pretty, the mustard mayo and pickled onions worked brilliantly as did the hyssop flowers but I found myself missing the crunch of the kohlrabi and seeds. More importantly the flavour of the coal oil, probably my single favourite component of the dish seemed lost in this version. Still a brilliant dish but I definitely prefer the original. 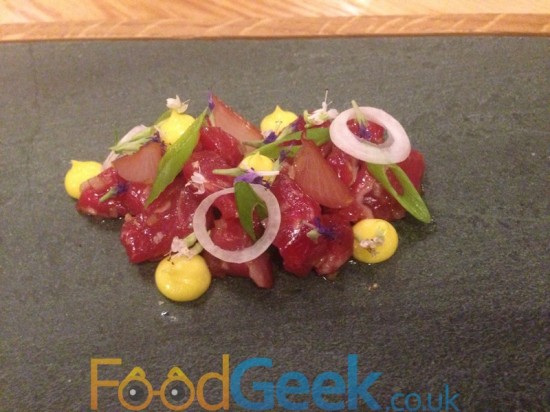 ‘Heritage potatoes in onion ashes, lovage, shallot, wood sorrel’ was possibly my favourite dish of the meal. The humble potato was somehow transformed into a soft, creamy thing of beauty and the accompanying ingredients created a wonderful tasting dish. Despite the fact that it looks like an ash tray has been emptied on my plate, onion ashes are a joy to eat. 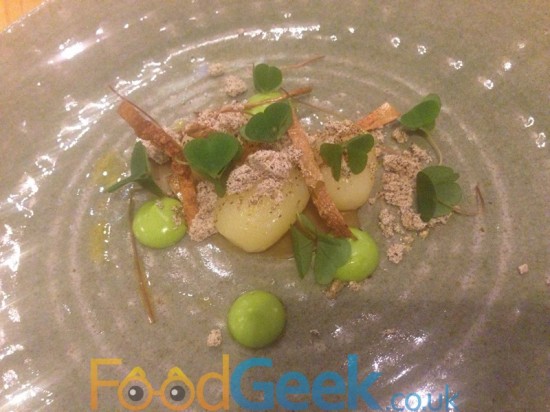 Last time I ate at The French the staff were excited about receiving a brand new, shiny BBQ grill which presumably had been used to grill the cabbage in the excellent ‘Poached oysters, charred cabbage, beer cream sea herbs’ dish. Charring cabbage gives it a unique flavour which I really loved with the subtle oyster. The beer really came through in the cream which worked brilliantly too. 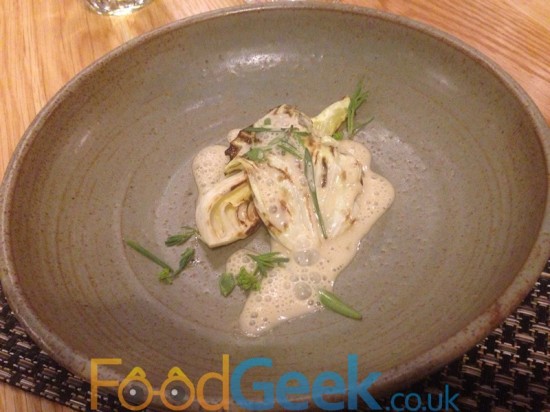 Despite the candied beetroot being a little too sweet for my tastes ‘Salt baked beets, smoked yolk, baby gem and toasted seeds’ was also a highlight for me. It was all down to the gorgeous flavour of smoked egg yolk and crunch of toasted seeds. 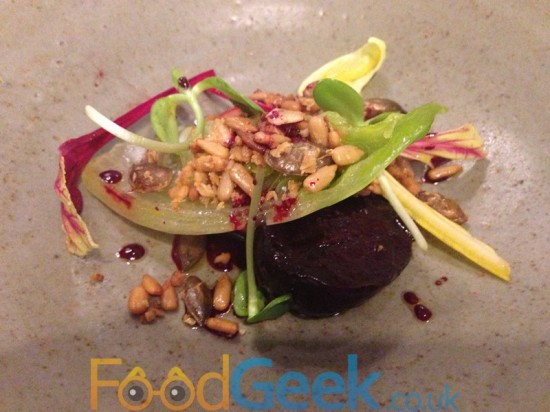 The ‘Chick ‘O’ Hake, dried tomatoes, red orache, roasted bone sauce, nasturtium’ dish was a favourite at Roganic and similar to one of L’Enclume’s signature dishes which I was secretly devastated not to see on the menu on my visit. It didn’t disappoint here, the perfectly cooked piece of fish is somehow connected to a crispy chicken skin as if they belonged together. They taste as though they do as well. As impressive as that was, for me it was the dried tomatoes which amazed the most just bursting with the most intense flavour I’ve ever experienced. The phenomenally rich and meaty ‘roasted bone’ gravy was also fabulous. Just a brilliant dish packed with huge flavours. 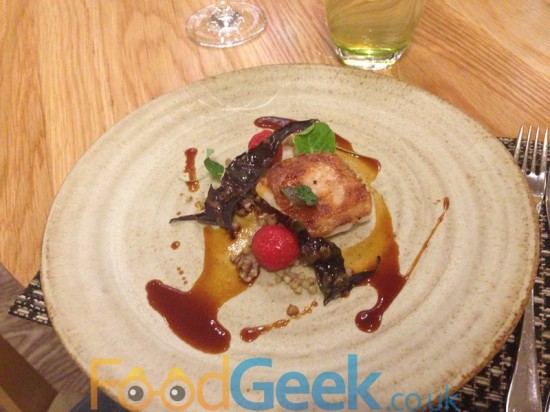 The Yew Tree farm hogget with wild garlic and sheeps milk I ate last time was a stand out dish but unfortunately on this occasion it was the least successful dish for me. I did love the blewits and the sweetbread was excellent but the hogget itself wasn’t even close to being as good as last time. Previously it was meltingly soft with a gorgeous crispy, charred exterior and full of flavour, in comparison it was a bit flat and resulted in the only slightly disappointing dish of the day. 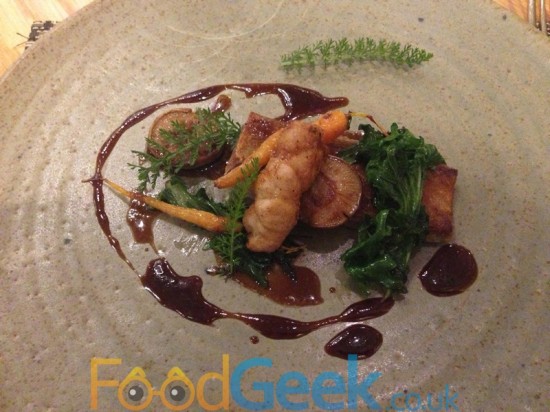 We were right back on track with the wonderful cheeseboard. We love goats cheese and so our selection included generous slabs of 3 different varieties, a smooth milky version, one rolled in ash and a blue goats cheese, a first for me which was really good. Another highlight was the always brilliant Mrs Kirkham’s Lancashire, probably my favourite ever cheese. The rustic biscuits and crackers were really good too, I particularly enjoyed the one topped with fennel seeds. 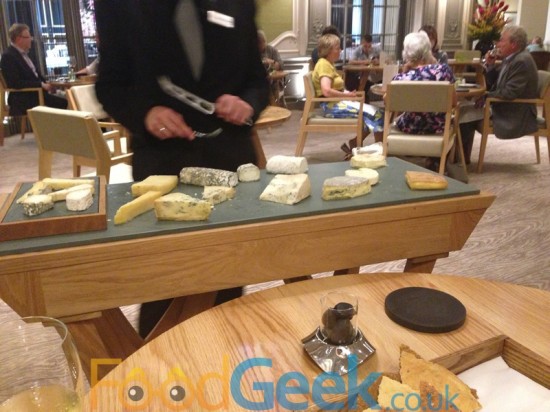 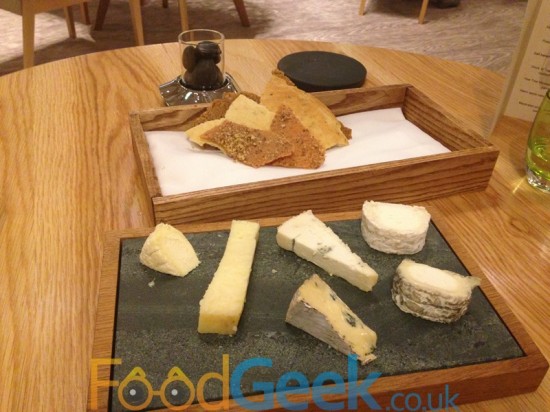 Any new desserts would have to be top notch to beat the pear and rhubarb desserts from the previous menu. The first new one was exactly that, despite containing the only ingredient I really don’t like: liquorice. Thankfully although I didn’t particularly enjoy the liquorice sauce it didn’t overpower what was otherwise a stunning dish. The warm apple cake was just amazingly soft and crumbly and almost melted in my mouth, the caramel was equally delicious and the apple sorbet brought a sharpness and freshness to the excellent dessert. 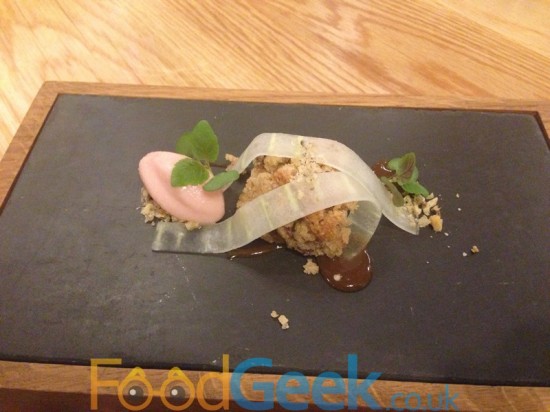 The final dessert of ‘Macerated strawberries, buttermilk custard, sweet cicely, yoghurt’ was stunningly simple yet beautiful and delicious. Like the tomatoes earlier the strawberries were intensely flavoured and complimented wonderfully by the other elements of the dish from the sweet and creamy buttermilk custard to the fresh and cooling yoghurt. 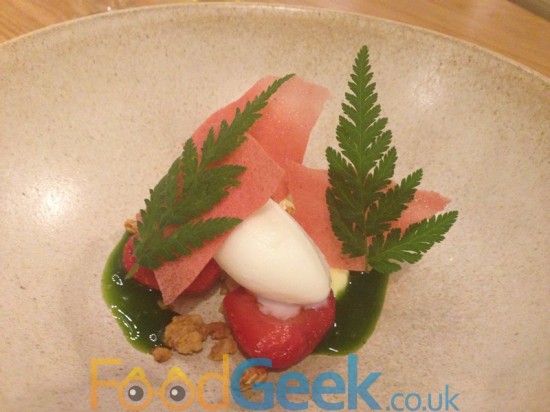 A final treat of ‘Shake ‘N’ Bake’ replaced the popular ‘Sass ‘N’ Soda’ from the regular menu. Comprising of a refreshing ‘Douglas fir milkshake’ with a Victoria sponge cupcake. I have to admit it wasn’t the best cake I’ve ever eaten but it will still a nice bite to eat thanks to the clotted cream and raspberry coulis. The milkshake was divine. 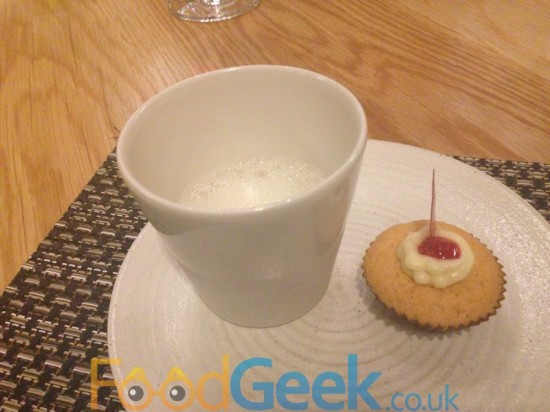 Finally this epic meal came to an end with petit fours of aerated chocolate & Uncle Joe’s Mint Ball ice cream which are every bit as fun the third time as they were the first and second. 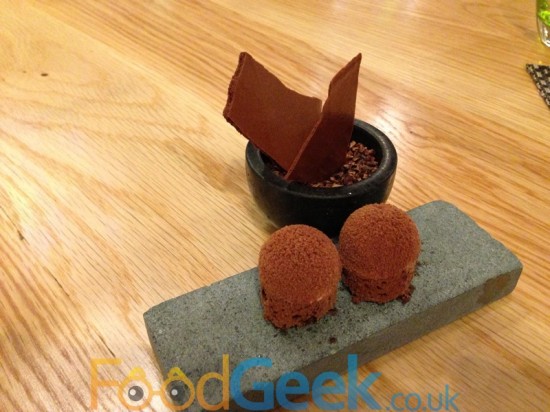 I simply don’t have enough good things to say about The French, we had an amazing time for the 3rd visit running. Not only stunning food but also enjoyed a few bottles of excellent quality and sensibly priced wine and received exemplary service as ever. It still blows my mind to think that we have somewhere so good in Manchester city centre. I made a prediction after eating here on opening day in March that it would surely bring Manchester it’s first Michelin star and I stand by that more than ever after this trip.

Yet there are even more exciting things to come next month with Simon opening his second restaurant in the Midland hotel, ‘Mr Coopers House & Garden’. I’ve already booked my table. 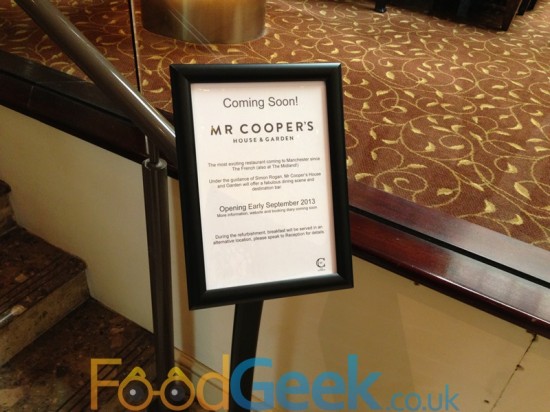 Follow @FoodGeekUK
Last week Manchester was transformed into a garden city with tress, flowers and even a forrest transported to the city centre streets. It was all in aid of ‘Dig The City’ festival, an event aimed at encouraging us to ‘grow our own’. With such an interest in food I’m probably their target audience but as ...