I have a huge list of restaurants I’d like to visit, one that was on the list for a while was ‘Red’ in Westhoughton. I was annoyed when it shut down before I’d had chance to pay them a visit as I’d heard good things about them and they won Lancashire Life’s ‘Best Restaurant of the Year’ within a year of opening. So I was happy to hear it had reopened as ‘Momentum’ with the previous head chef & manager who met whilst working together at the excellent Lowry hotel in Salford.

We arrived at 12:15 on a Sunday afternoon and I was surprised by how quiet it was, I’ve read good reviews of their Sunday roasts and they’re certainly excellent value, it must fill up later I assumed. The other thing I noticed was how cold it was in the restaurant, I was shivering within minutes. We were directed towards a table next to a radiator which was very welcome, until we sat down and realised that it wasn’t turned on!

Despite my fingers turning blue I just about managed to open the menu and choose from the very modern and varied selection. There are dishes from many different cuisine’s from hearty English pub grub to Spanish, Italian, Thai and even Mexican. I had plenty of time to take all of this in as nobody came to take our order for at least 20 minutes.

When they finally did I ordered ‘Chilli squid taco with guacamole, green leaves, mango & lime salsa’ but was then in for another long wait. Not only did we wait a further 30 minutes for it but nobody came anywhere near our table during that time, we’d long since finished our drinks but were never offered more. When the starters did arrive there was no apology or even acknowledgement of our wait and I had to ask for more drinks as the waitress didn’t ask despite both of our glasses being empty. It’s fair to say I was not impressed so far.

At least my starter looked fantastic; bright, vibrant and exactly my kind of food. It tasted really good as well but there was just nowhere near enough filling. The squid and salsa that you see in the photo is literally all there was, inside was just a little guacamole and a few more leaves. As well as there not being enough squid I didn’t feel that it stood up to the other big flavours. Everything else worked brilliantly together though. As usual i’d like a bit more of a chilli kick but there was a nice heat coming through, the mango & lime salsa was sweet and zingy and the guacamole was excellent. There just needed to be a lot more of everything because the last third was just mouthfuls of dry taco shell. 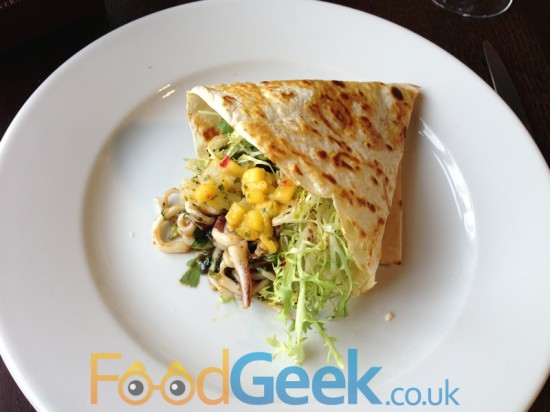 My partner ordered ‘Five day corned beef hash with crispy poached egg, overcooked bacon and houses of parliament sauce’ which sounded great and looked very neat and attractive too. She cut into the egg and was pleasantly surprised by the lack of runny yolk but that’s because she’s weird and doesn’t like soft cooked eggs. If it was mine i’d have been disappointed not to find a lovely runny yolk.

She also didn’t enjoy the liquid around the plate either. We’ve no idea if it was intended to be there or not but both agreed that it definitely shouldn’t have been. It wasn’t a sauce, it was far too thin and wishy washy. A real shame as other than that it was a nice dish. Whilst the corned beef had the same flavour of the tinned stuff it wasn’t dry and crumbly but full of flavour with a soft, melt in the mouth texture. The egg, bacon, meat and brown sauce was a nice comforting flavour combination. 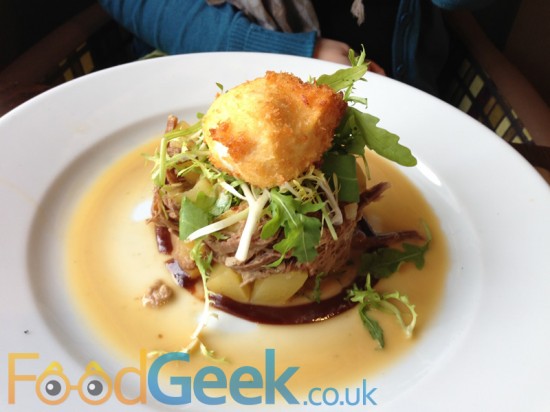 Another lengthy wait ensued and we had long passed the hour mark in the restaurant despite still having only received our starters.

The wait was again made slightly better by the first impressions of our main courses which both looked fantastic when we eventually got to see them.

My dish of ‘Braised rabbit ‘Catalan style’ with white beans, chorizo, red wine & herbs’ was a really hearty and warming plate of food. The various different cuts of rabbit were perfectly cooked, tender and moist. The red wine sauce was deep, rich and full of flavour which matched the chorizo and herbs brilliantly. A perfect accompaniment for the rabbit, a faultless dish that transported me to Spain. 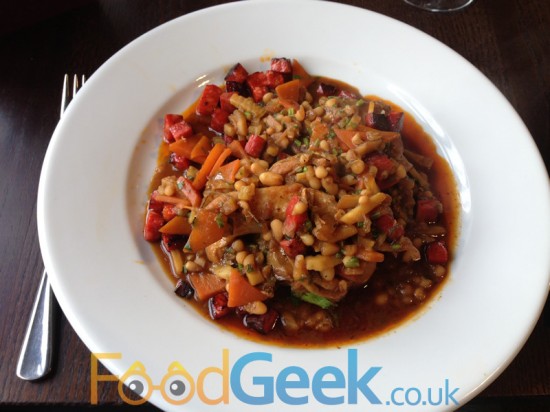 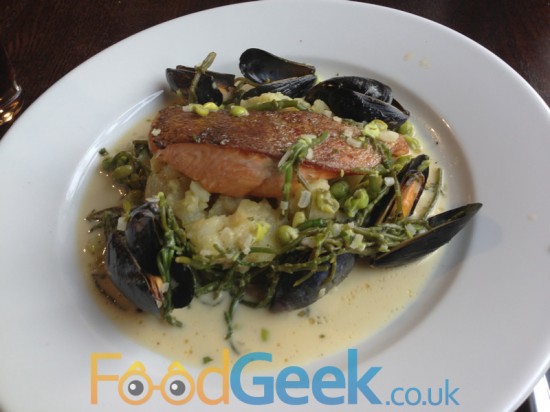 We’d been in the restaurant for well over 90 minutes by the time our plates were removed and when asked whether we wanted desserts I really wasn’t sure. I didn’t fancy sitting around for another 40 minutes. Remember when I said I assumed it would be busier later? Well it wasn’t, it was after 2pm by this point and still only a handful of tables were taken so I really have no idea why we waited so long not only for our food but for any kind of service.

In the end I did order a dessert, mainly because i’d already got my heart set on the ‘Warm passion fruit and coconut cake with mango and passion fruit sorbet’. I’m really not a big coconut fan but I make up for it in my love of passion fruit so was very excited to try it.

I was even more excited and intrigued when it arrived looking nothing like I expected. More like a baked egg custard than a cake, with the top and edge which had been exposed to the heat of the oven turning crisp and golden almost like pastry and a soft, creamy, custardy centre. It was absolutely gorgeous, a perfect balance of coconut and passion fruit, one of the nicest and most interesting desserts I’ve had for a while. It was only let down slightly by the sorbet which tasted good but was very grainy. 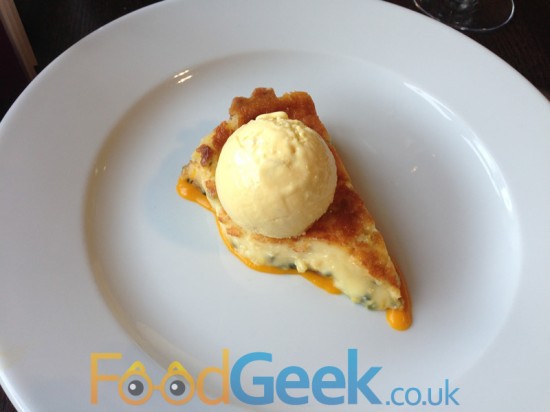 As well as taking 2 hours to eat 3 courses in an almost empty restaurant and receiving very limited service we didn’t get any warmer for the duration of our stay. I’m sure a lot of people would have complained about being cold or asked for the heating to be turned on, I know I could have and they may well have done it for me. Personally I don’t think I should have too, I’m sure the staff are quite aware of how cold it is and should be considering the needs of their customers.

Save The Worst For Last

My biggest complaint though was when on the way out I noticed a huge blackboard with a ‘Market Menu’ offering 2 courses for £13.95 or 3 courses for £16.95. I was annoyed that nobody had mentioned this to us before we ordered as the board wasn’t visible from where we were sitting in the restaurant so we had no way of knowing that it was available. To make matters even worse; one of our main courses, the trout dish was on this menu so I could have ordered it with a starter for £13.95 but instead they didn’t tell me and let me pay more than that for the fish dish alone and then pay for a starter on top. I was so angry about this that I purposefully held off writing this review until I had calmed down.

It’s difficult to sum up my experience at Momentum as it was so up and down. The food was the high point; besides a couple of minor complaints with the starters it’s generally very high standard and a really diverse and interesting menu. Clearly there were huge issues with the incredibly slow time between courses and even worse the complete lack of service. The restaurant being freezing wasn’t great and three days later I still feel cheated by not being offered the Market Menu but then letting me pay more for a dish off it than it would’ve cost with another course had I known about it.

Overall I don’t think the quality of food can outweigh all of the negative feelings I have about everything else so I can’t recommend Momentum and I think I would struggle to return.

Follow @FoodGeekUK
I have a huge list of restaurants I’d like to visit, one that was on the list for a while was ‘Red’ in Westhoughton. I was annoyed when it shut down before I’d had chance to pay them a visit as I’d heard good things about them and they won Lancashire Life’s ‘Best Restaurant of ...