TheGastroClub is a group of Manchester food lovers started by Katie Brunt in 2010. I followed it’s progress closely during the early months, almost joining on many occasions. Although i’d often already eaten at the places they visited I love that they ask the restaurants and chefs to offer menus which aren’t available to the general public and containing innovative dishes.

Just as I finally plucked up the courage to join last year, Katie disappeared on a year long trip around the world. Probably just bad timing but I hope my decision wasn’t a factor in her wanting to leave the country!

Katie is back now and last week saw the return of GastroClub, the first in a year and back to the scene of the very first event in 2010, The Mark Addy. The moment I saw the menu that legendary local chef Robert Owen Brown had planned for the diners I quickly signed up and booked my place.

The Mark Addy is named after a local hero, the only civilian to have received the Albert Medal from Queen Victoria after rescuing 50 people from the River Irwell, the river upon who’s bank the restaurant bearing his name now sits.

We arrived early and enjoyed a couple of drinks on the outdoor dining area whilst watching the chefs cooking intriguingly wrapped foil parcels on the 10ft steel barbeque and spit. 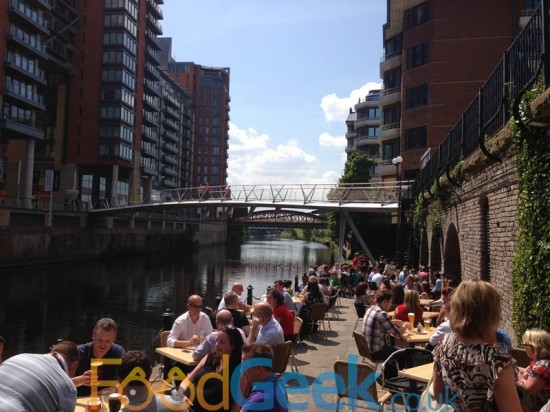 When we went through to the restaurant and took our places at a table of 4 we somehow ended up with the only 2 empty seats in the building opposite us. This was despite it being a sellout with 80 diners in total, so either whoever set the tables can’t count, 2 people didn’t show up or a couple squashed in somewhere else and ate without a knife and fork to avoid sitting near us.

I’d normally be over the moon for the 2 of us to be given a table for 4 but it was a bit unfortunate as the social aspect of GastroClub is almost as important as the food. Almost. It was hard to be too upset when I remembered what amazing food we were about to receive. 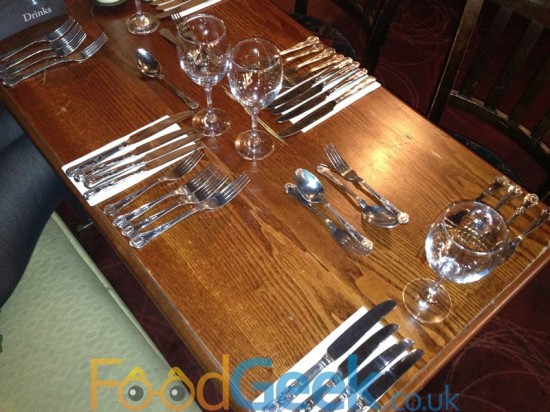 Chef Robert Owen Brown introduced his menu and then it was finally time to eat!

Starting with ‘Wild Salmon Carpaccio’, a simple but beautiful dish. The salmon thinly sliced and served with a simple lemon & chive dressing. Wild salmon as good quality as this doesn’t need cooking, as chef joked “there’s bound to be someone who complains it’s raw – it’s bloody well meant to be!”. 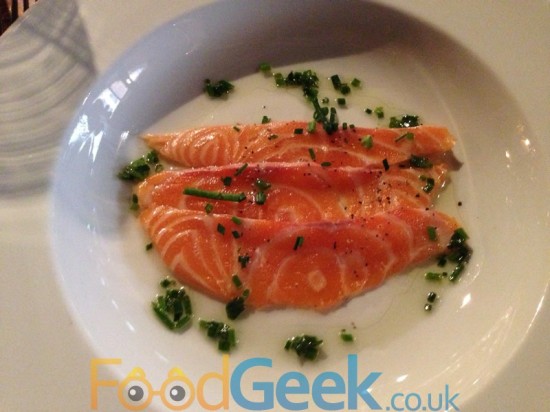 The perfectly cooked pheasant egg sat upon earthy mushrooms and a very unpretentious round of Warburtons white sliced bread. Drizzled with a gorgeous Hollandaise it was delicious. 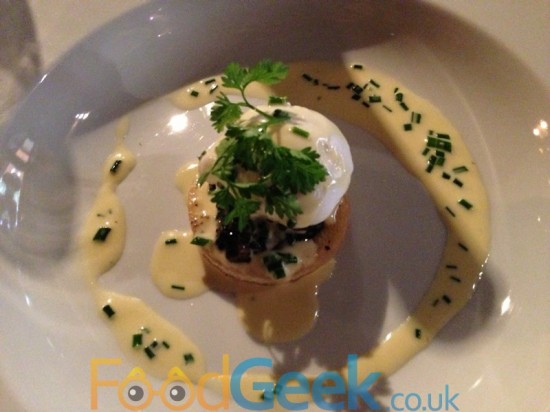 The fish course was the one I was most intrigued by, having not the slightest clue what Sea Robin was. I have to admit being slightly disappointed when it was revealed it’s actually just another name for Gurnard.

The disappointment didn’t last long though as not only did it look impressive with it’s pastry fish tail but it tasted fantastic too. The sea robin had been wrapped in pastry, almost like a spring roll and was served on a stew of heritage tomatoes and Yorkshire chorizo. I didn’t know there was such a thing as Yorkshire chorizo but after tasting it all I can say is, who needs Spain? 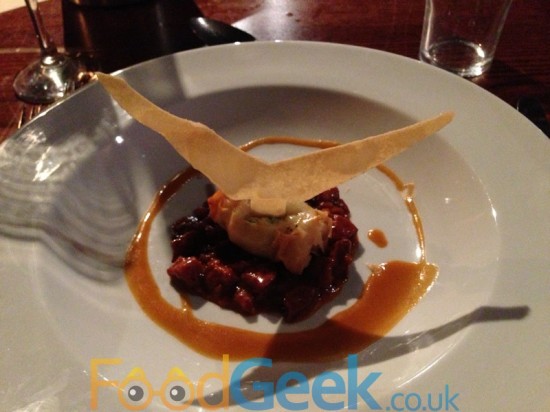 The main course was described as ‘Rare Bread Roast within a Roast’ and consisted of a Goat kid, Piglet, Rose Veal Calf and Salt Marsh Lamb literally roasted inside each other. I kid you not (sorry). They may have been baby animals but it was a whole lot of meat and took four chefs to carry it! 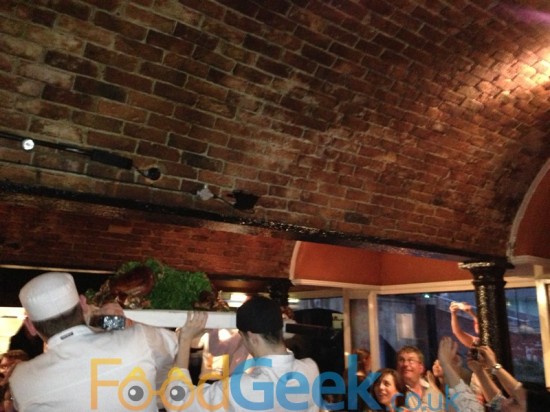 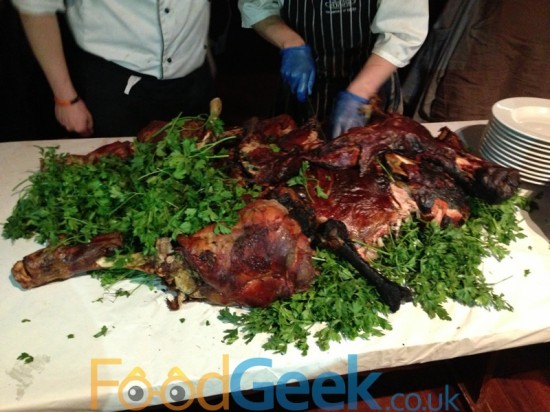 Rare Bread Roast Within A Roast

Generous portions of juicy roast meat were delivered to each table along with simple accompaniments of buttered new potatoes, carrots & courgettes, a seasonal green salad grown at a local farm with a fantastic mustard dressing and of course plenty of gravy!

Though it was difficult to know exactly what you were eating the meat was devine, our already generous portion was gone in minutes and was quickly replaced with an even bigger plateful. 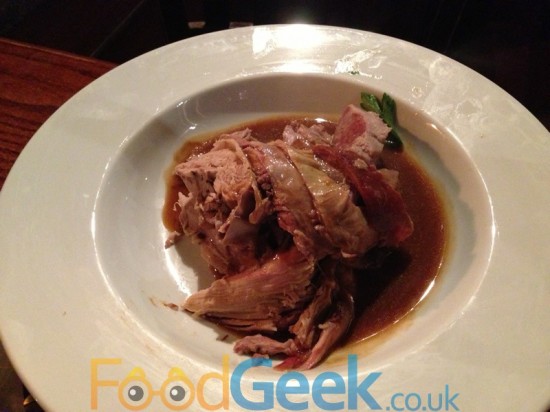 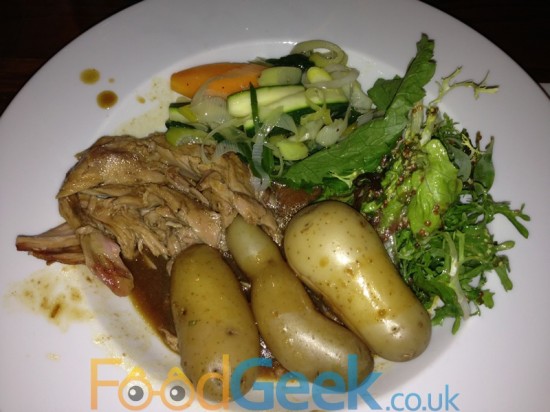 Despite eating far too much meat I couldn’t wait for the fascinatingly titled dessert ‘Pop Memories’. Described as “a selection of five desserts all with fizzy pop at the roots” it contained a Vimto Jelly, Dr Pepper cheesecake (with popping candy base), Rubicon mango ice-lolly, American cream soda mousse and a Coke float.

It was every bit as exciting as it sounded. The Coke float didn’t really do it for me as it just tasted of flat Coke but the other 4 elements were as delicious as they were intriguing. Particularly the Dr Pepper cheesecake which is one of the best things i’ve eaten all year. It was a fitting end to a fabulous meal. 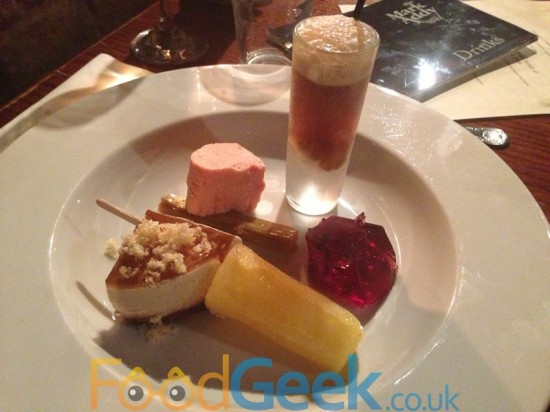 So, the food was absolutely fantastic, I sincerely applaud chef Robert Owen Brown and his team for being able to pull it off for 80 people.

There were a couple of negatives with the service such as the waitress who promised to look after us not only disappearing for 20 minutes at a time but seemingly avoiding eye contact on the rare occasion that she was in view. We ended up having to order bottles of wine at the bar as table service was pretty much non-existant for large periods of time.

Wanting to be honest when asked for feedback by the Irish owner/manager I explained what had happened and he was hugely apologetic and seemed genuinely disappointed. However, I do appreciate that it was far from a normal service for the staff so I won’t hold it against them, nor would it stop me from eating there again in future.

Despite sitting by ourselves we soon realised by the wonders of the internet that local Twitter friends @LaurenCoulman, @DeannaThomas & Liz @ThingsToDoinMcr were on the very next table! We exchanged a few awkward waves and then many bottles of wine later when feeling a bit more brave a quick chat over the remains of the roast. I had intended on going over properly at the end of the night but unfortunately ended up having to run for the last train.

Having to rush off before the end also resulted in us missing out on a doggie bag of leftover meat but considering how much i’d already eaten perhaps that was a blessing in disguise.

Overall I had a brilliant night, I definitely made the right decision to join TheGastroClub and look forward to attending future events.

Follow @FoodGeekUK
TheGastroClub is a group of Manchester food lovers started by Katie Brunt in 2010. I followed it’s progress closely during the early months, almost joining on many occasions. Although i’d often already eaten at the places they visited I love that they ask the restaurants and chefs to offer menus which aren’t available to the ...