I’ve been meaning to revisit 3TwentyOne for a while after really enjoying their preview night in May. Even more so after the launch of their great offer ‘Rib Tuesdays’ but what finally made it happen was hearing they have an outdoor terrace which I didn’t know about. This past Tuesday the weather was absolutely glorious in Manchester and I couldn’t think of anything better to do than sit in the sun drinking cold beers and eating ribs!

We made our way up the stairs at the back of The Deansgate pub, through the restaurant and stepped out into a sunshine paradise! 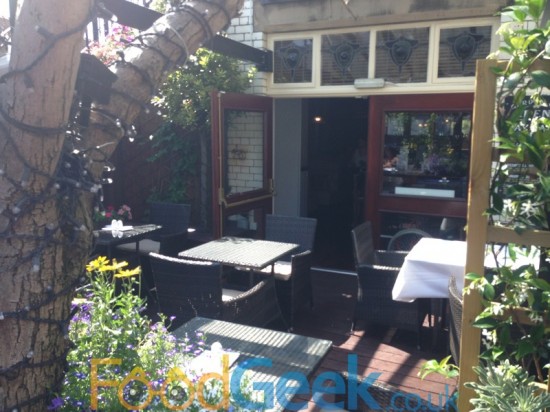 Whilst cooling down with a couple of ice cold Corona’s our starters quickly arrived. Knowing what was to come and being influenced by the weather we’d purposefully chosen light and summery dishes, firstly ‘Barbecued King Prawns’.

A simple dish but hugely enjoyable thanks to the perfectly cooked, juicy prawns served on top of warm, charred bread. 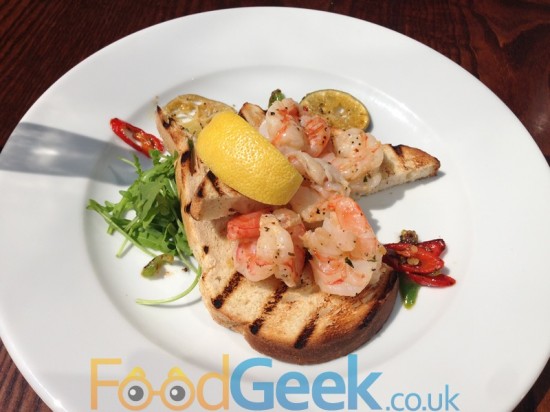 I was intrigued by the flavour combinations of the ‘Smoked Salmon & Crushed Strawberry Salad’ but they really worked, it was stunningly colourful, fresh, vibrant and delicious. The flakes of hot smoked salmon tasted fantastic and were complimented brilliantly by the small and subtle pieces of crushed strawberries. With crisp leaves, roasted peppers, cucumber and croutons it was a really good, interesting salad. 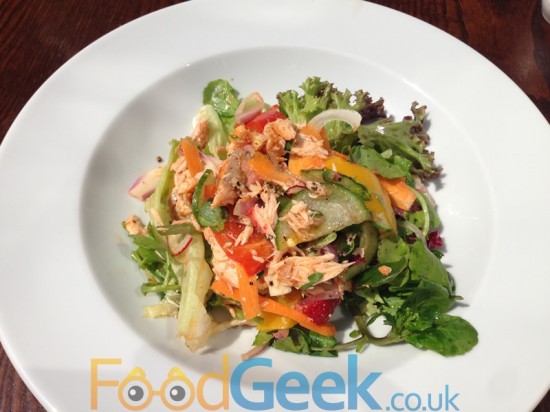 The Rib Tuesday offer is a box of house smoked ribs with mixed fries, house slaw and sweetcorn lollipop.

The ribs were phenomenal in terms of the quality of cooking, seriously tender and falling off the bone. Head chef Jason Latham clearly knows what he’s doing with his smoker. They’re available glazed in a choice of 3 different sauces; honey jerk, redneck or bourbon BBQ. I went for redneck after the waitress described it as “spicy BBQ”. It was OK and I still enjoyed the ribs with it but it wasn’t at all spicy and a little too sweet for my tastes. Mrs FG’s ‘honey jerk’ however was just amazing. Not too sweet despite the honey and a really nice spicy kick. I know which i’ll be ordering next time!

The mixed fries were really good, especially the sweet potatoes as was the juicy sweetcorn, though I would have liked it to be a little bigger.

The only disappointing thing in the box was the slaw which looked exciting with it’s vibrant purple colour but really didn’t taste of much, it definitely needed seasoning and would have benefited from a bit of chilli or acidity to lift the flavour. 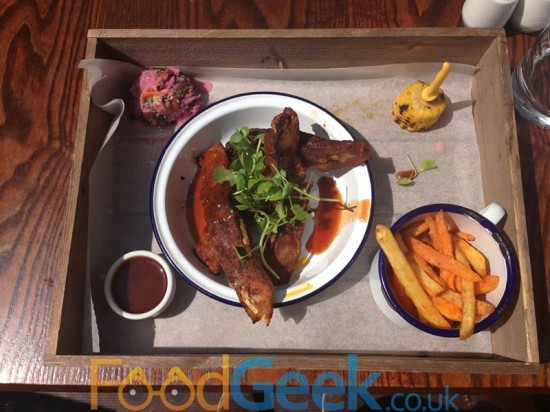 Feeling a little full we almost didn’t do dessert but there’s always room for cheesecake! The baked ‘Blueberry & Vanilla Cheesecake’ wasn’t the best i’ve ever had but it was a pretty good one that we very much enjoyed. Especially with the summery berry compote. A good end to a great meal. 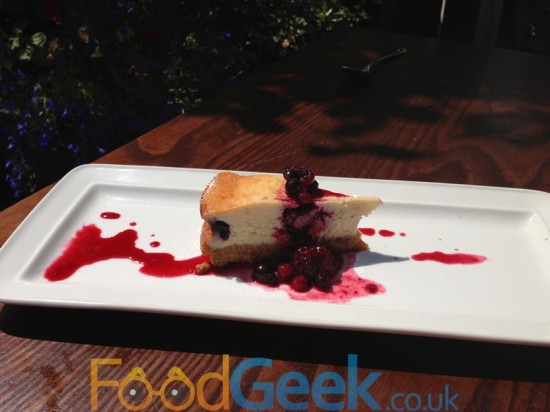 It was nice to see that the quality of food at 3TwentyOne is still just as good as it was on the opening night. Unfortunately the service doesn’t seem to have come on much since though as we encountered a couple of similar issues.

Nothing serious and the staff were all perfectly polite but little things that stopped the overall experience being as good as the food deserves. For example we weren’t given a ‘Rib Tuesdays’ menu, nor was it mentioned to us at any point. Luckily I was already aware of it but if I wasn’t we’d never have known and would have missed out on such a brilliant offer. Also, after ordering the ribs I had to remind the waitress that there was a choice of sauces as we weren’t asked.

We never received the bottle of water that was ordered with our first round of drinks upon arrival, despite having empty glasses on our table the whole time and we were never offered more drinks at any point, we had to specifically ask for them each time.

Minor points maybe but also very simple to rectify and make a much better overall experience. It didn’t stop us having a great time though nor will it stop us returning soon because the food is more than good enough to make up for it. The ‘Rib Tuesday’ box is also exceptional value at just £9.95!

Follow @FoodGeekUK
I’ve been meaning to revisit 3TwentyOne for a while after really enjoying their preview night in May. Even more so after the launch of their great offer ‘Rib Tuesdays’ but what finally made it happen was hearing they have an outdoor terrace which I didn’t know about. This past Tuesday the weather was absolutely glorious ...