MEATliquor – What Almost Famous Tries & Fails To Be

If you’ve read my Almost Famous review you’ll know that I have a problem with their ‘edgy’ attitude & marketing. So you may find it strange that I loved MEATliquor as it’s pretty clear that Almost Famous were very heavily inspired by them in the first place.

There are a few subtle differences though, firstly whilst MEATliqour do have a bit of attitude they don’t ram it down your throat like Almost Famous do but most importantly, the food is much better. As the saying goes, “It ain’t braggin’ if it’s true”.

We rolled up at around midnight after a Green Day gig, I may have been drinking in the sun for several hours which may have caused me to storm straight past the member of staff waiting at the door to greet and seat us. Whilst I was stood at the bar trying to order Mrs FoodGeek was being shouted at by said waitress. Not a great start, especially as it was my fault. I finally realised what was going on, returned to the table and waited for our order to be taken in the conventional restaurant manner.

I say conventional, there isn’t much conventional about MEATliqour. It’s very dark with most of the light coming from seedy Amsterdam style red lamps and it’s very, VERY loud but for some reason it feels right here. There is just enough light to show off the quite extraordinary decor though, i’m struggling to find words to describe it. Slaughterhouse? Graffiti chic? Whatever it’s called it’s unlike anything i’ve ever seen before and very intense when combined with the ‘extreme’ music. 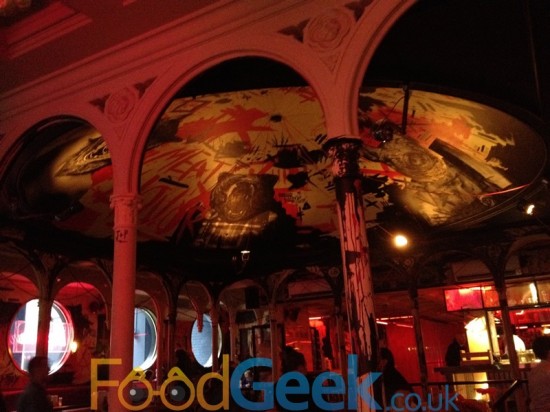 Just like Almost Famous they mainly serve burgers, wings and fries. Unfortunately since winning the SoLita Hot Wing Challenge last month I still haven’t been able to even look at a chicken wing so I had to give them a miss.

There are some epic sounding burgers but for me it was always going to be the ‘Green Chilli Cheeseburger’. It arrived pretty quickly and was amazing. I’d love to tell you whether it was cooked medium rare or not but as I was eating in almost darkness it was difficult to say visually, it certainly tasted like it was cooked perfectly.

Whilst it lacked the refinement of my favourite burgers at SoLita it was still one of the best burgers i’ve ever eaten. The very definition of a ‘dirty burger’, it was gooey, greasy and dripping in all the right places. The meat was beefy and well seasoned, the chilli butter had a good kick which was topped up with a good amount of genuinely hot jalapeños. Together with the burger classics of ketchup, mustard, pickles & red onion in a squishy white bun it was jaw dropingly tasty. 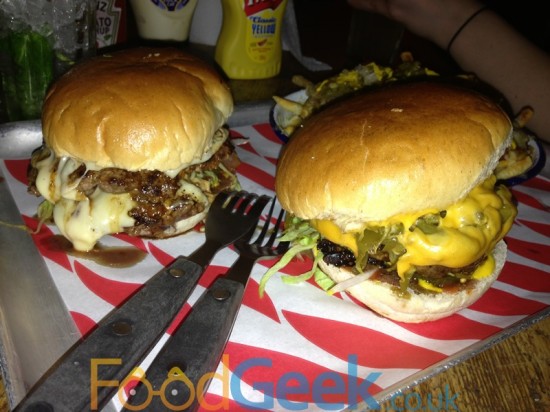 Mrs FG went for a ‘Mushroom Swiss’, two beef patties with all the classic toppings, lashings of swiss cheese and plenty of mushrooms. I ended up eating half of it and enjoyed it almost as much as my own. The meaty mushroom flavour really stood up well whilst the dripping melted swiss cheese was well worth the mess it made.

We shared a portion of ‘Chilli Cheese Fries’ which were also fabulous. Crisp, highly seasoned fries smothered with meat chilli, onions, mustard & jalapeños. Like my burger they had a huge chilli kick which I loved, i’m sure many would struggle with the heat though. 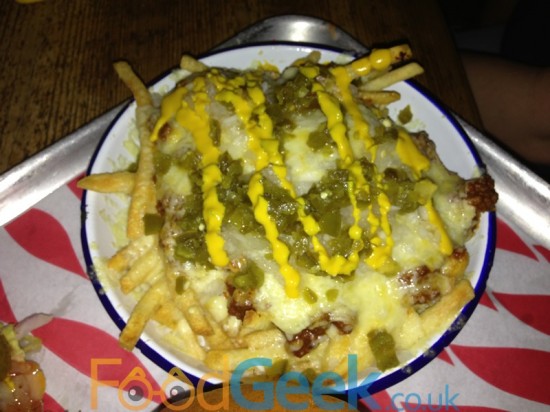 As the name suggests, drinks are just as important as the food here and so despite being a little worse for wear it was important to try a couple of cocktails. I went for my all time favourite, the classic Mojito, or MEATJITO as they have ‘cleverly’ renamed it (* it’s not clever). Thankfully it doesn’t actually contain any meat and was a damn good Mojito. Mrs FG had a ‘Fallen Angelita’, tequila with cointreau, rum & agave nectar which was also excellent. They were served in jam jars though which is surely getting a bit tired now.

Other than the altercation at the start which I take responsibility for service was fine although it was pretty difficult trying to attract their attention due to the darkness.

So yes, I really liked MEATliquor despite it not being totally logical as a lot of the reasons I didn’t love Almost Famous definitely exist here too. But being a foodie, the fact that the quality here is infinitely better certainly helps, as does the fact that they’re orignal and not obviously trying so hard to be cool. It’s really good value too, especially cocktails of this quality in the centre of London.

It’s also entirely possible that the circumstances of the visit helped too, I think it’s fair to say that my opinion might not be the same had I arrived stone cold sober, on a wet Tuesday early evening but for this occasion it was perfect and I loved it.

Follow @FoodGeekUK
If you’ve read my Almost Famous review you’ll know that I have a problem with their ‘edgy’ attitude & marketing. So you may find it strange that I loved MEATliquor as it’s pretty clear that Almost Famous were very heavily inspired by them in the first place. There are a few subtle differences though, firstly ...