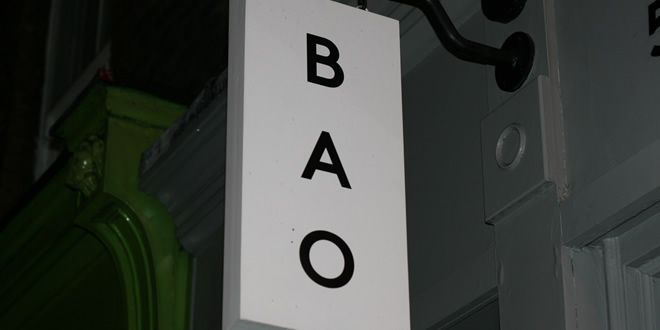 You always want something more when you can’t have it. And as I stood waiting opposite BAO at 21:55, I REALLY wanted it.

I knew the Taiwanese steamed bun restaurant was the current ‘go to’ place in London and I’d heard all about the queues. But I wasn’t able to get to Soho until 30 minutes before they closed at 10pm. So I was hugely relived not to find a queue out of the door and even a couple of empty spaces inside.

Until I got in and one of the waitresses – dressed oddly in what appeared to be a science technician’s lab coat – pointed to a crowd of people across the street. Most were clutching the same little paper menus I’d spotted on the tables inside. Ah, that must be the queue. Bugger.

Nervously I joined the back of it, and waited. 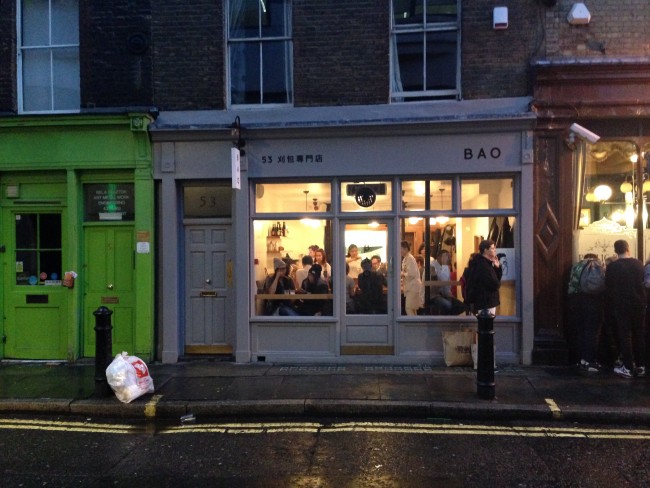 My view for a nervous 26 minutes..

We seemed to be moving fairly quickly so I was pretty optimistic. Until about 15 minutes later when the same lab coat wearing waitress came to tell us, just us, that the kitchen closed in 10 minutes and we were unlikely to get inside in time.

I was clearly gutted but it was nearly 10pm on a Saturday night in London. I had no plan B and couldn’t imagine walking into anywhere better. I’d come this far, might as well wait another 10 minutes, just in case.

It turned out to be a wise decision as we eventually got in with 4 minutes to spare. 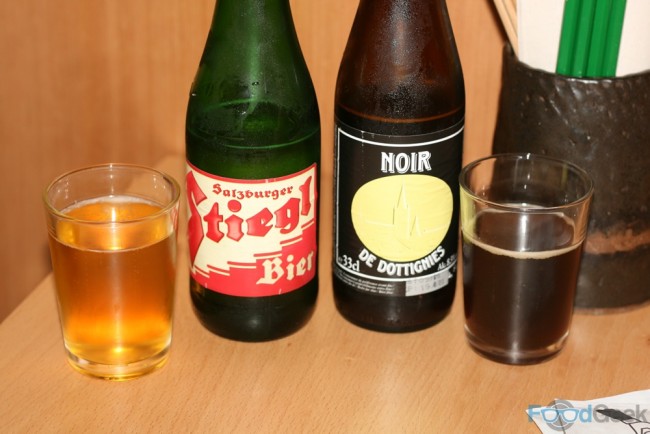 We only had a couple of minutes to order – done by putting numbers in boxes on the paper menus with small pencils, not dissimilar to placing an order at Argos – luckily we’d decided outside and just got it in on time. 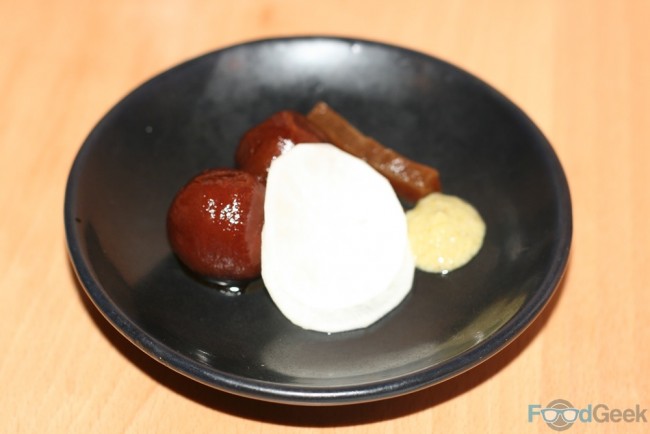 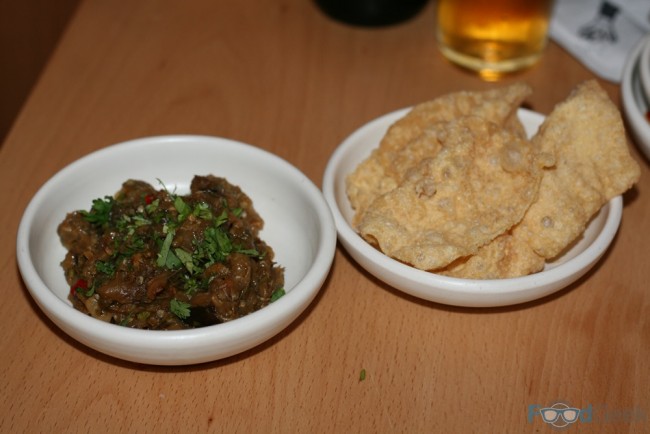 Beautiful crispy batter on the outside, superb juicy chicken inside, there was hints of ginger as well as that distinctive umami taste you get with Asian food. Topped with savoury and very spicy hot sauce. 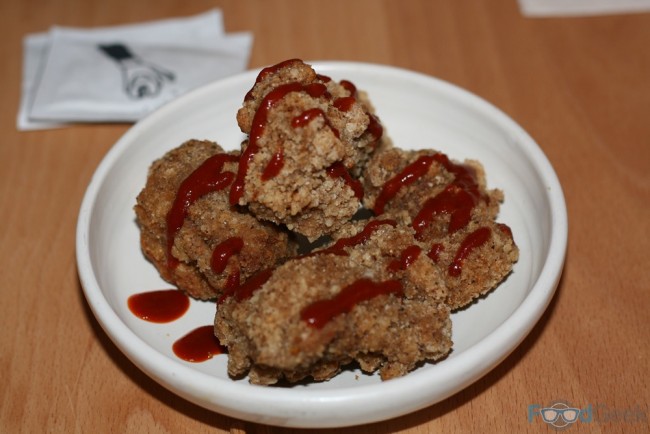 And then the dish that gives the restaurant its name.

Bao are soft, pillowy steamed buns filled with all sorts of delightful ingredients.

I first fell in love with them from Yum Bun at Street Feast last year and have had them at every opportunity since. 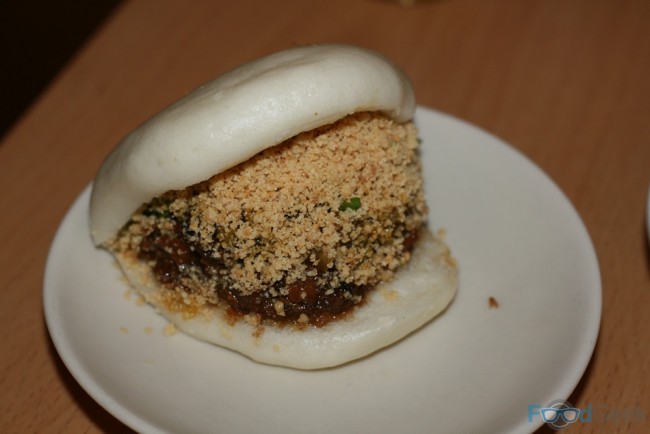 Just as good was the ‘Lamb BAO’, with equally succulent shredded lamb and a zingy sauce that cut through the richness of the meat perfectly. 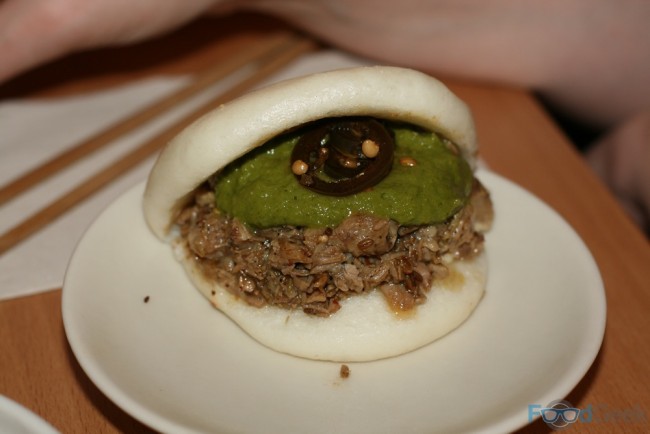 As much as I enjoyed the first two, perhaps surprisingly one of my favourites turned out to be the only vegetarian bao on the menu.

The ‘Daikon BAO’ contained a large, thick chunk of the posh white radish that had been fried in a light crunchy batter. That in itself was a brilliant combination with the soft bun but it was the addition of sharp pickled daikon, fresh coriander and hot sauce which brought it to life. 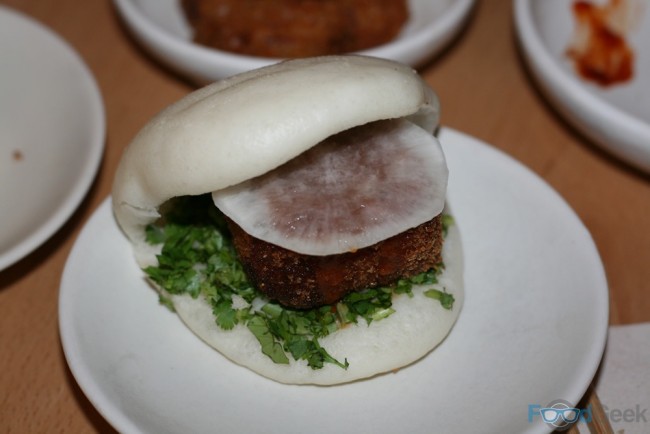 The only disappointment was finding that they’d sold out of possibly the most instagrammed/tweeted dish of the year, ‘Fried Horlick’s Ice Cream BAO’.

Under normal circumstances I’d have been devastated by this news, it was disappointing but I was still so relived to have even made it in at all, so it was difficult to be too down.

Instead we went for the intriguing ‘Peanut Milk’ to finish. It’s difficult to describe it as anything other than cold frothy milk with a distinctive taste of peanut.

A simple dish but very enjoyable all the same. 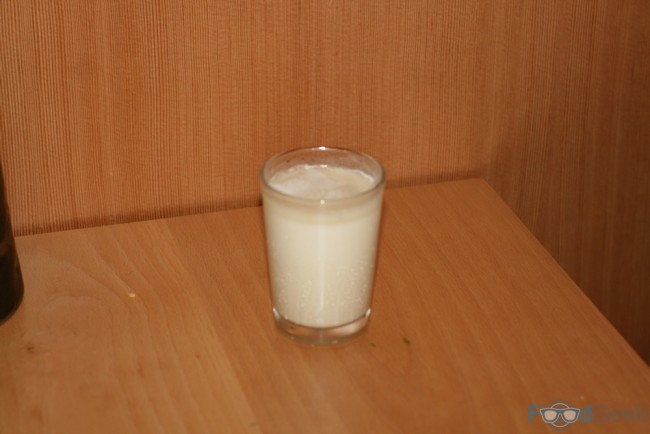 Service was fast and hectic but very friendly.

I’m so glad I stayed in the queue even when it looked like I wouldn’t make it, as I really enjoyed BAO and can totally understand why so many people love it.

It’s fast, fresh, full of flavour and good value. Not particularly cheap, as portion sizes are relatively small so you can easily run up a sizeable bill. But for food so good in that part of London it’s well worth the money for me.

I’ll definitely be returning but much earlier next time to avoid that nervous wait and make sure I get my Fried Horlick’s BAO.

Follow @FoodGeekUK
You always want something more when you can’t have it. And as I stood waiting opposite BAO at 21:55, I REALLY wanted it. I knew the Taiwanese steamed bun restaurant was the current ‘go to’ place in London and I’d heard all about the queues. But I wasn’t able to get to Soho until 30 minutes before ...

Previous: ‘The Cheek Of It’ by The Drunken Butcher
Next: 6/Cut Pizza Co Monton – ‘Proper Sourdough Pizza’ In… Eccles?